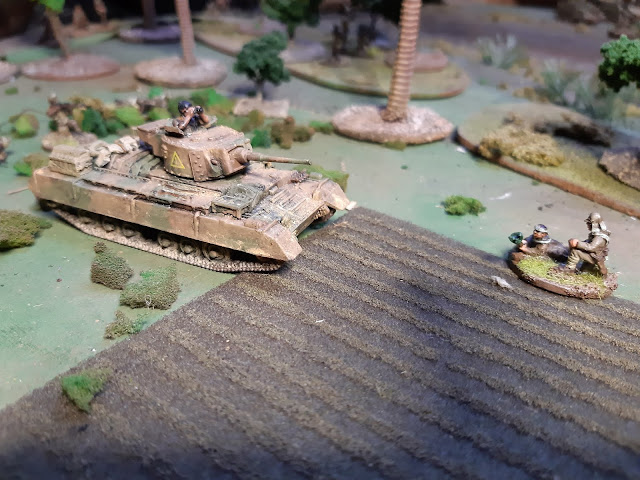 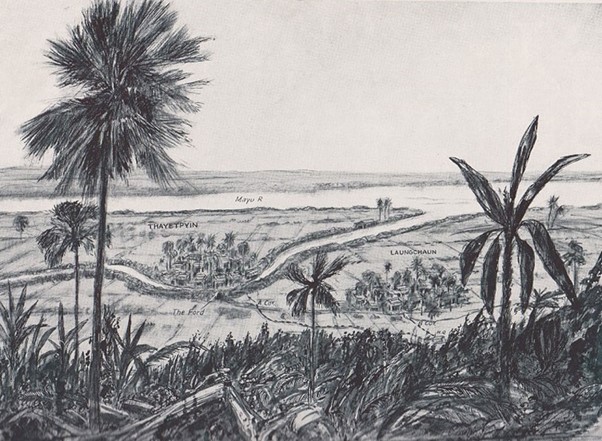 The 14th Indian Division, began advancing south from the frontier between India and Burma, on 17 December 1942. It was commanded by Major General Wilfred Lloyd ,The Japanese defenders of the Arakan peninsula were of two battalions of the 213th Regiment of the 33rd Division commanded by commanded by Colonel Kosuke Miyawaki

Most of the Japanese occupied the port of Akyab, a single Japanese company were sent to block the narrow coastal plain between the sea and the foothills of the Mayu Range 1 mile north of Donbaik, They constructed well-concealed and mutually supporting bunkers protected by a chaung (a tidal creek) with steep banks 9 feet high. The 47th brigade of the 14th Indian Division attacked this line between 7 and 9 January 1943, but were repulsed.

"The next attempt to take the chaung was on 1 February. 55 Brigade, supported by eight Valentine tanks ('C' Squadron, 146 Regiment, Royal Armoured Corps) made heroic efforts but were unable to overwhelm the myriad machine-gun posts now dug in to the chaung. Despite heavy harassing fire from the artillery, the Japanese had clearly been able to reinforce and continue to fortify the chaung, and it is at this point that the notorious bunkers such as 'Sugar 5' (known for its arty target identifier - S5) begin to be mentioned"

This scenario focuses in the attack of the 55 brigade assisted by the tanks brought up with great difficulty from India. These form C squadron 146 RAC.

Forces chosen from the Japanese Infantry Division (with Burma alterations from Battlegroup-Pacific War) and British Infantry Division list with my own alterations for 1943. The Battlegroup Pacific War suppliment uses infantry organised as fighting patrols - really an innovation brought into being in theatre during the extensive jungle training insisted on by General Bill Slim. In the Arakan in1943 a more regular infantry platoon organisation would be legitimate but I fancied trying the new organisation perhaps an innovative Indian Army colonel?

Victory
The first army to reach their BR total. The British Indian forces can win an all objectives gained victory.

The British Indian force start in the North Western corner on the only . Japanese forces are deployed in two mutually supporting strongpoints  along a branch of the chaung.

This is a planned attack the Royal Artillery have fired a mixed HE and Smoke barrage against the Japanese Positions therefore for the first two turn aimed fire may only be conducted at short range. At other ranges only suppressing fire may be used. 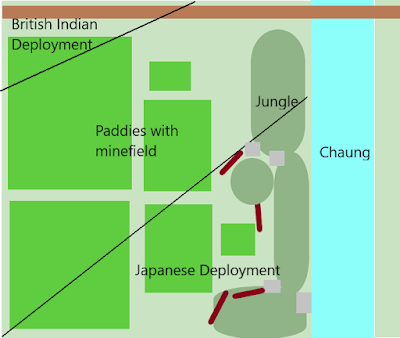 AAR  The Battle of Sugar 5

This was an attack defence scenario so under the battlegroup rules the Japanese army deployed all of its defences from the list and all of it troops into those defences. They were deployed  to represent 2 mutually supporting strongpoints. The furthest toward the British Indian deployment zone had half the trenched and a MG bunker and the Artillery OP bunker placed in the jungle edge with good visibility but hopefully difficult to spot. The second strong point had the rest of the trenches and the mortar pit and an Antitank bunker. The mortar pit is tucked out of site beside the Chaung and the AT bunker with it;s captured 2 pounder AT gun again just within the Jungle but with good visibility. The final piece of the defences was a marked minefield 10" in front of the forward strongpoint. Positioned to force any attacker to move in front of the bunkers as they approach. The infantry were deployed to protect the bunkers I would rely on the excellent cover save that the hardened bunker would provide to keep the Machine gun and anti tank gun firing.  Most of the infantry are in the trenches but one rifle section in each strongpoint  along with the 50mm mortar battery and the antitank section (using lance mines for suicide attacks) where a mobile reserve.
The Dogra regiment would lead there attack with the valuable tanks. The three Valentines historically all ditched on the  paddy field bunds and were not recovered. The paddies where difficult ground for the tanks and they made heavy going here but none where immobilised. Historically the humidity also jammed their BESA machine guns and they did get a breakdown chit later in the game. The tanks slipped and slid forward out of range of the AT bunker for now the Japanese defender held there fire and waited.
The attackers brought a great weight of Mg and artillery fire against the first strongpoint of sugar five. The MG bunker was able to pin the attacking infantry but the tanks used there own machineguns to pin the supporting infantry. The constant barrage really limited what the defenders could do and a series orf disastrous communications role deprived the defenders of there own mountain guns. This allowed just enough freedom for the determined men of the 17th Punjab regiment to close and assault the position.
The battle ended in a series of hard fought close assaults in the jungle around the defences. A last minute drought in orders convinced the Japanese to call the Banzai! as it gains a d6 extra orders. However the Dogra's had sufficient support in place and the deadly fire of the Bren gun section broke the Japanese force just as the Bunker objective fell.