General Yanagida of 33 Division before leaving Singgel “ordered Colonel Sasahara to send a raiding party to destroy the suspension bridge on the Silchar track at milestone 51 from Imphal (34 from Bishenpur). The Japanese believed this track could form an alternative supply route for the British when the Dimapur-Imphal road was cut. A party of six infantrymen, four sappers and seventeen Jiffs, commanded by Lieutenant Abe, set off across the hills on 28 March for this raid….

…While these moves were taking place the raiding party which Colonel Sasahara had dispatched from Singgel to cut the Silchar track was nearing its destination. However, while resting in a village about five miles south of its target, the bridge at milestone 51, it was surprised by a patrol of the 7/10th Baluch (two companies of whom were under command of 32 Brigade) and lost several men killed. Despite this sharp setback the party reached its goal on the 13th and watched many jeeps cross the bridge. The next day they reconnoitred the bridge and made their plan. It was a big suspension bridge capable of taking light vehicles and with a 330 foot clear span across a gorge about 80 feet deep. There were sharp turns on to the bridge at each end. An Indian Field Company was working on the track and guarding the bridge at night. Their task wasn’t an easy one.

Accounts of what happened that night differ. About midnight on the 14th/15th the Japanese seem to have created a diversion on one bank and, under cover of this. Sergeant Saito and three sappers slipped unseen onto the bridge from the other side. Charges were laid on each of the cables and at 0300 both charges were fired simultaneously, the bridge falling into the river. According to Japanese accounts one Japanese sapper jumped to his death and two were killed in the explosion. Nevertheless, it was a very successful and daring exploit and was duly acclaimed as such on Tokyo Radio. The bridge was not repaired and open to traffic again until the 10th of June, by which time it was irrelevant. For the British, who knew that only a trickle of supplies could come this way, this was a relatively minor set-back and by no means as serious as the Japanese supposed. The Japanese, however, thought that to cut this track was essential to complete their encirclement.”

Leitanak River gorge Manipur India is a steep side gorge forested  on the east and with fields and trees as well as a few houses on the west and counts as difficult terrain off road. The Silchar track makes a sharp turn onto the bridge in both directions. The river is passable as dangerous terrain. A narrow track leads into the jungle North East. There are several jungle huts on the west bank they should provide only soft cover. The jungle and trees also provide soft cover. . The bunds around the field provide hard cover for troops behind them 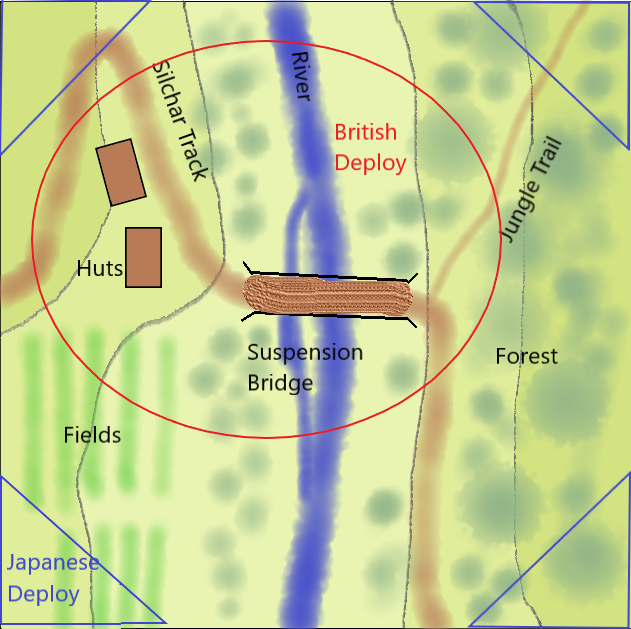 The Japanese player divides his force into upto 4 divisions (he may use less if he chooses)and secretly decides which deployment zone to assign to which force. The British Indian forces then deploy all there forces on the table in the area of the village and bridge. The British empire force may deploy there defences  The remainder of the Forces can enter from either road south or north after turn 3.  The Japanese forces  arrive from turn 1 in the Japanese players deployment area of choice on a role of 1-3 on a 4-6 the division is delayed and does not arrive yet, It may role again next turn.

All aircraft chits count as 5. There is no close air support available during the night.