AAR Out Gunned on the road to Thala 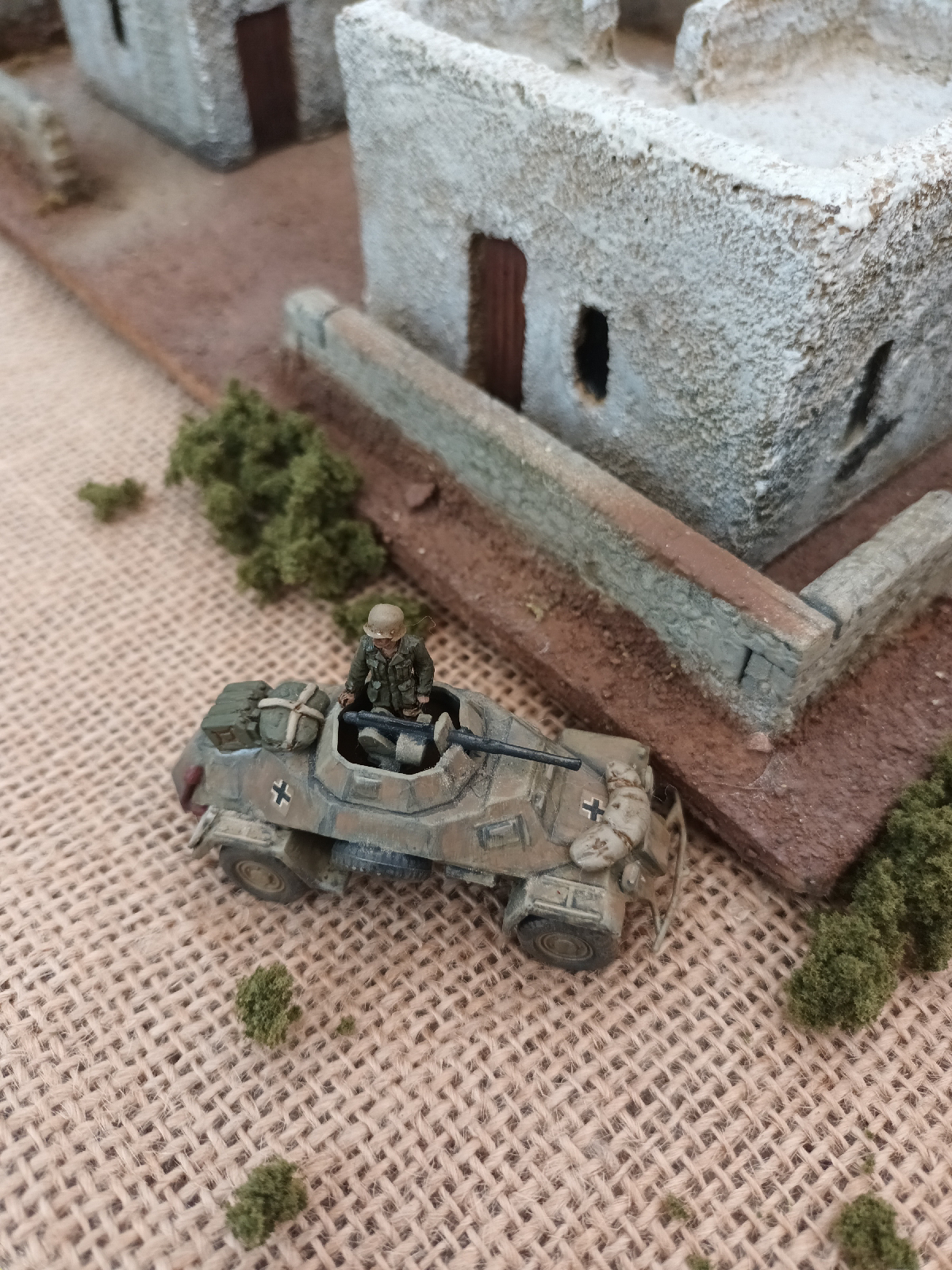 This was I Recce Screen scenario for battle group rules facing 800 points of British armour from Gore force against 800 points German panzers from the 10th Panzer division there were three objectives the valley just outside the farm, the road in the centre of the table marked by a desert well and one at the high point on the Ridge marked by destroyed gun. 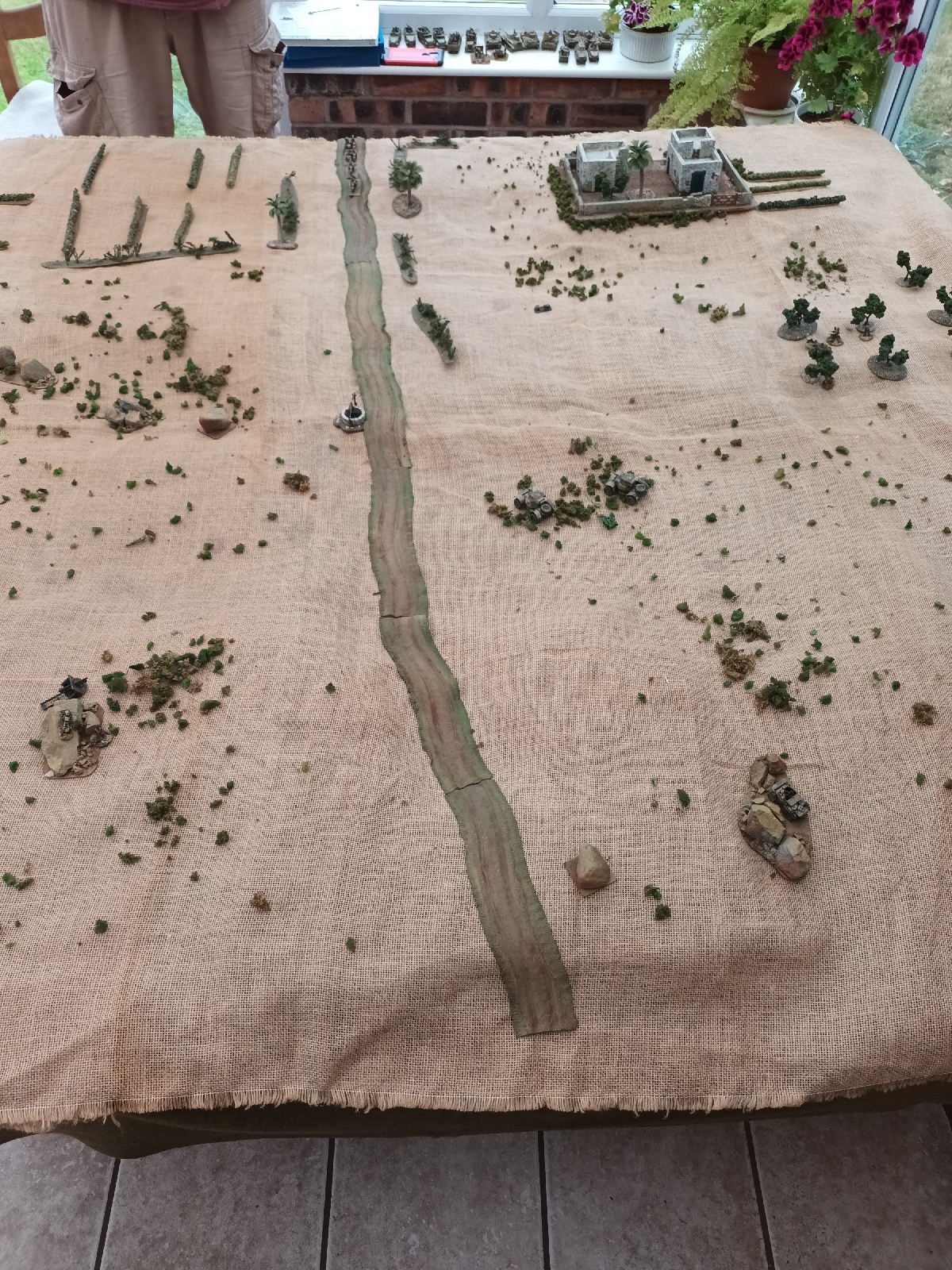 off table battery of 2 25 ponder guns

1 Kradschutze squad in Motorcycle an sidecar

The British won the recce battle forcing the Germans to take a chit before the game began. I first deployed a foot patrol into an olive orchard near the farm with the aim of trying to seize the objective nearby. The dingo armoured car would be spotting for my off-table artillery - a battery of 25 pounders. They deployed on the Ridge in the cover of the rocks. My sniper team deployed in some other rocks nearby close to the ridgeline objective. Two Daimler armoured cars deploying in the scrub near the road intended to make a run for the road objective and seize that as well.

The German reconnaissance surprisingly light and included a motorcycle patrol and a single Skfz 222 armoured car. The motorcycle patrol split sending half of them to grab the objective near the farm supported by the armoured car and the other half straight up the road clearly aiming to seize the well. To prevent that objective falling into British hands. 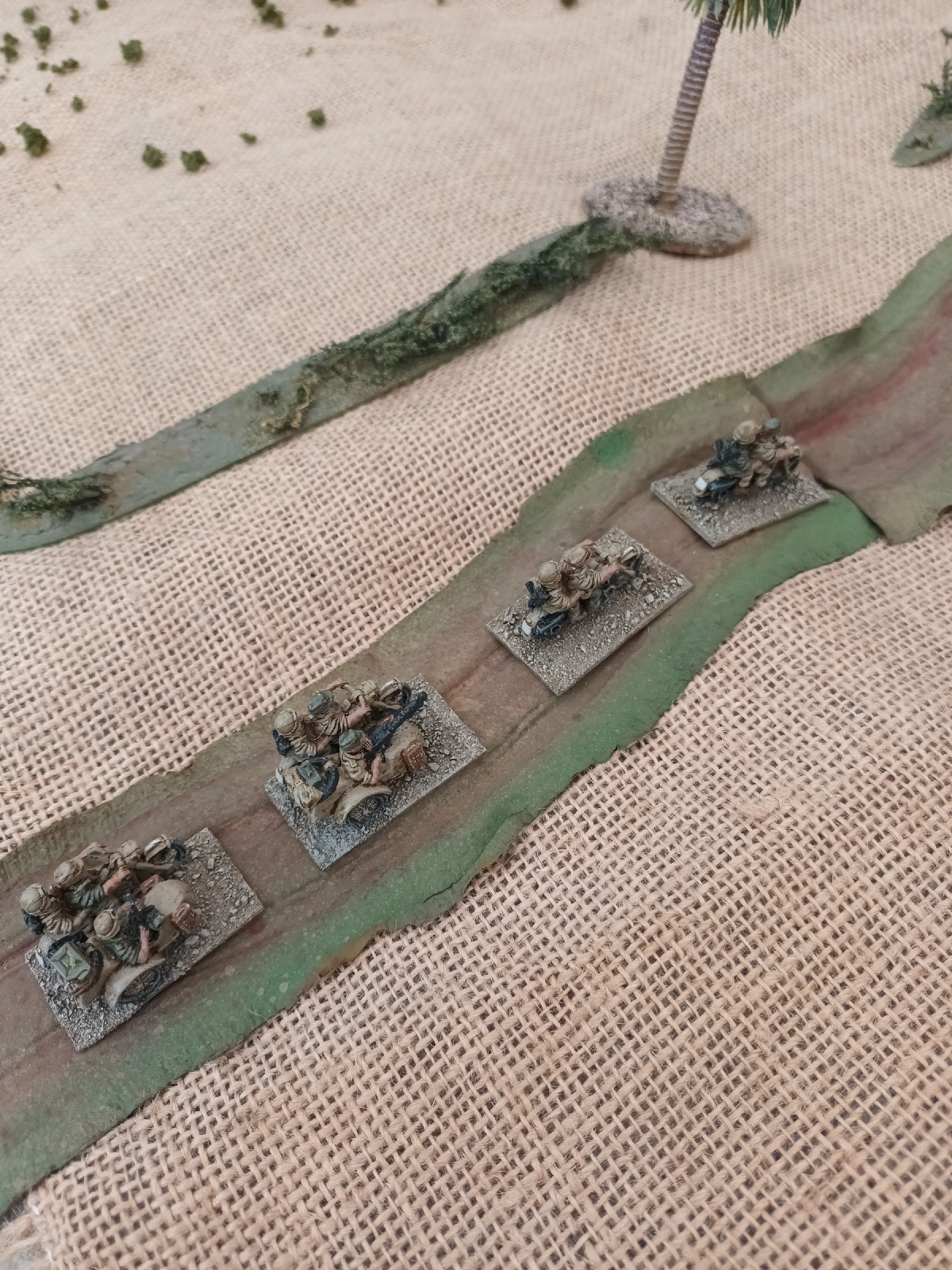 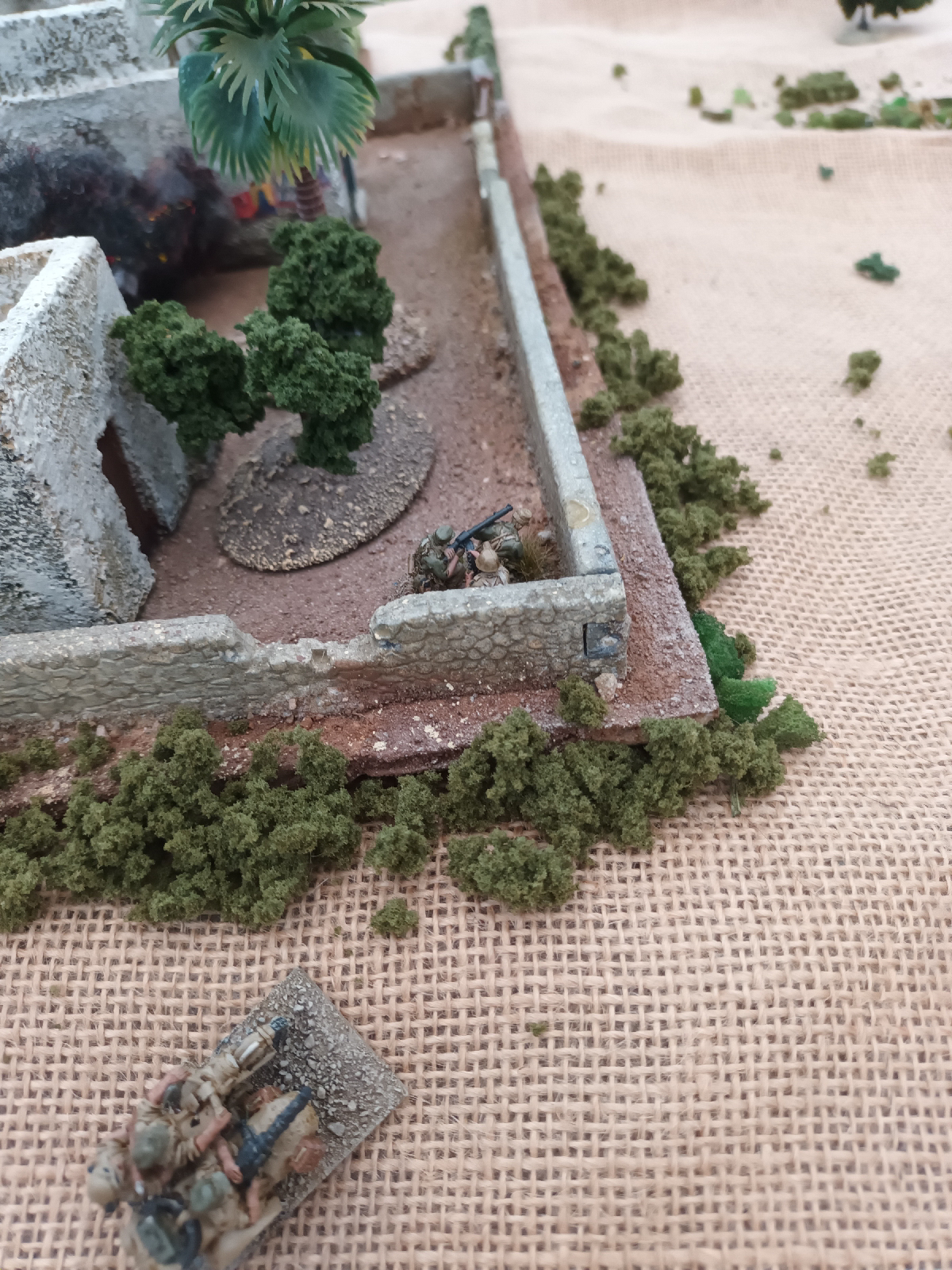 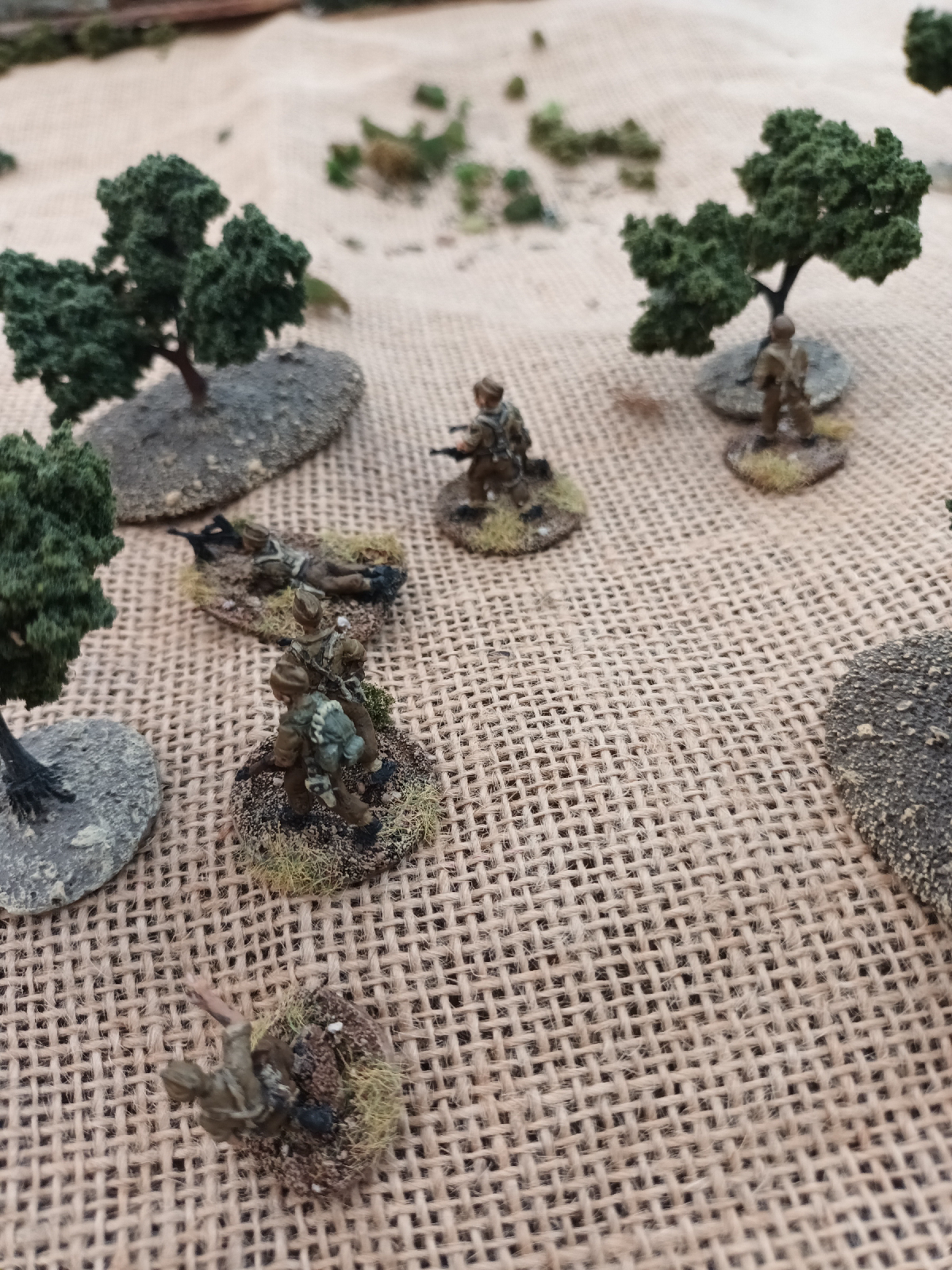 My foot patrol exchanged fire with the motorcyclists as they deployed into the scrub pinning them down but not causing any other casualties. The British of Gore Force  with  overwhelming reconnaissance assets we done well during the first reconnaissance phase of the battle causing the Germans to take 3 chits.  With the reconnaissance phase over the main forces begin to advance up the road. I split my force it's two parts one platoon of infantry and my Valentine III tanks would hold the ridge whilst the second platoon of infantry supported by the faster Crusader II’s would advance and try to hold the objectives further ahead on the plane one platoon in lorry's advanced into the scrub and debussed to begin their attack on the well objective. 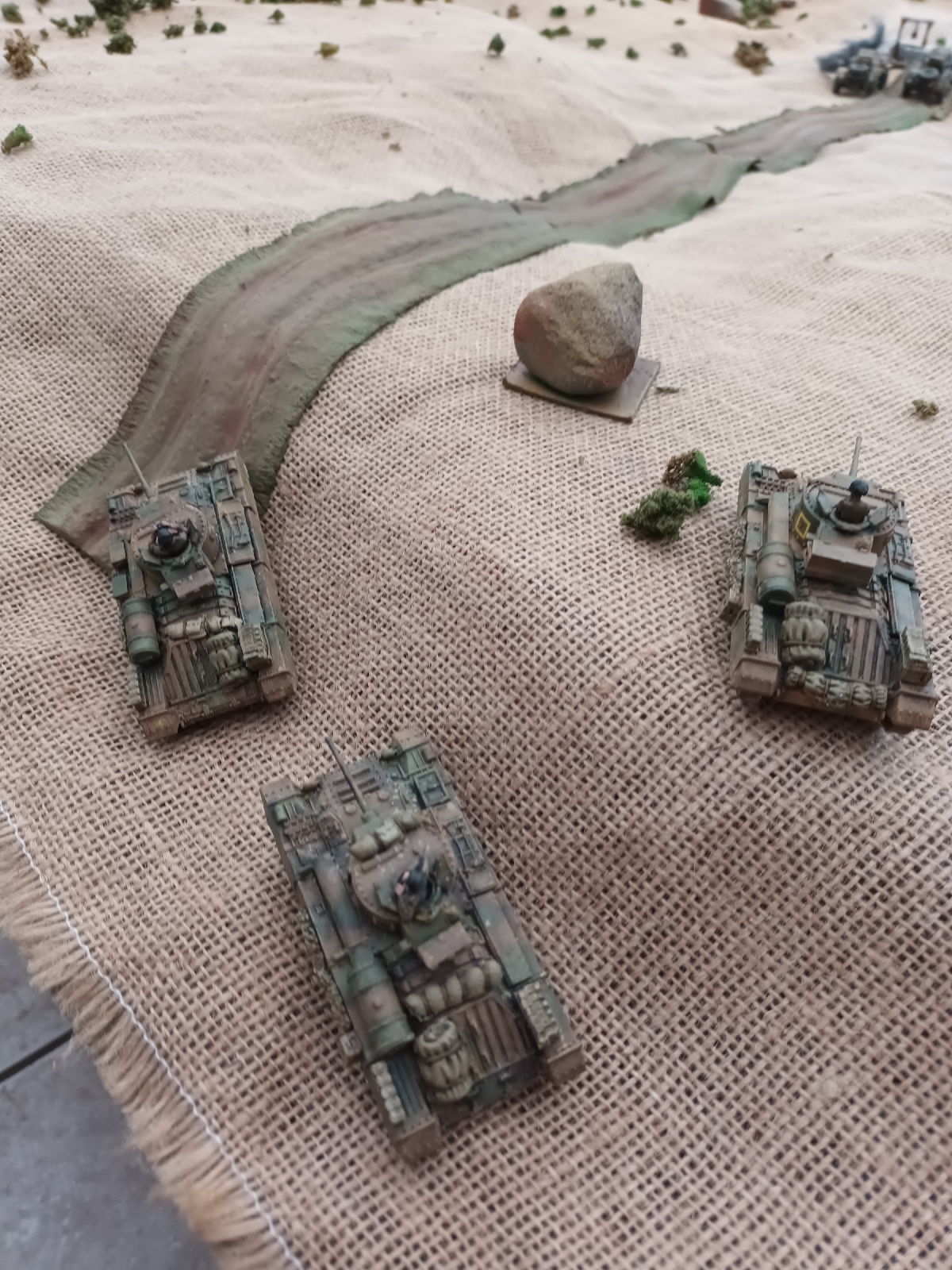 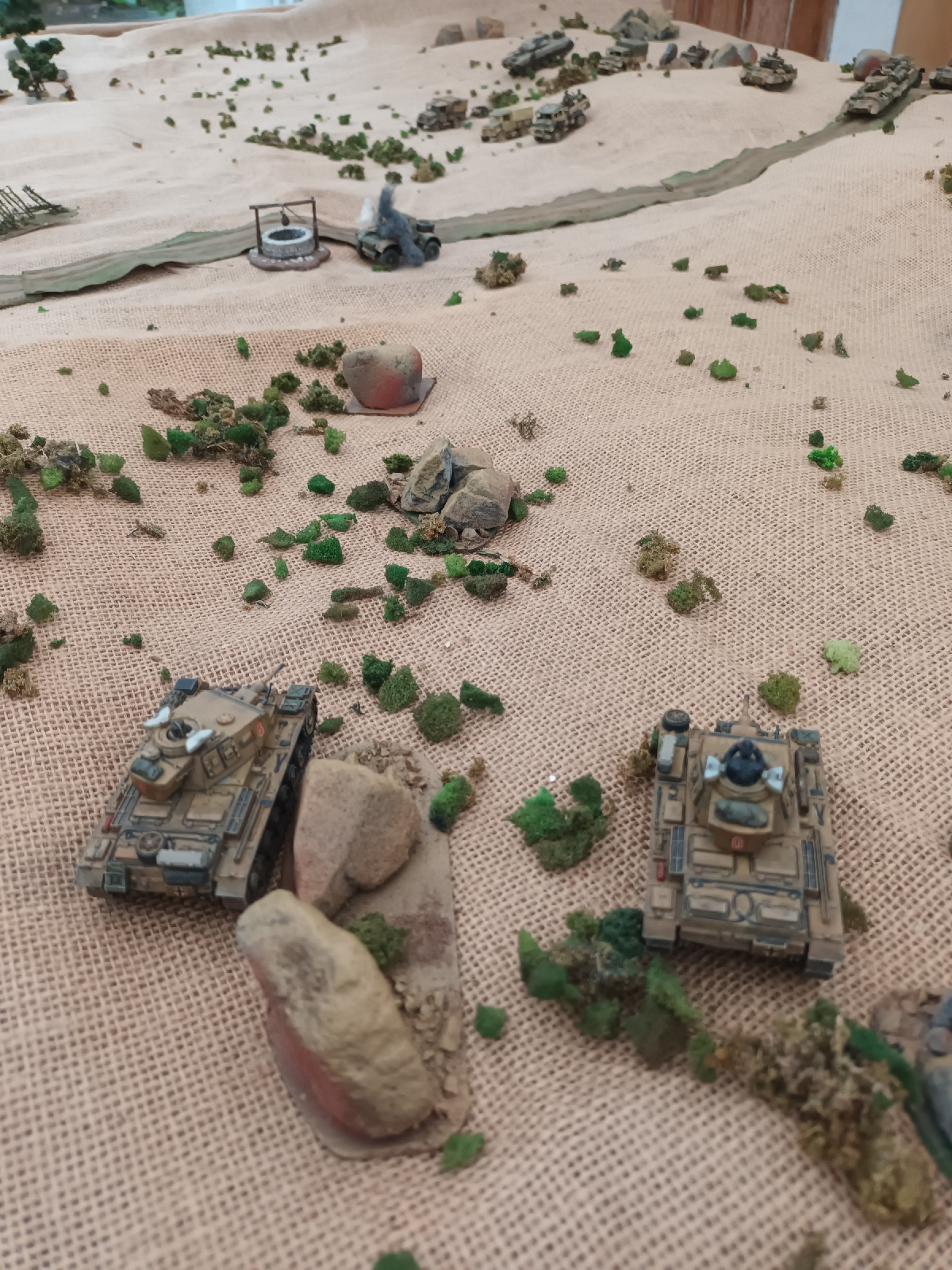 Also Valentine's exchanged fire ineffectively with the German Panzer. The German’s had a platoon of armoured panzer grenadiers very expensive points wise but difficult to break and very quick as they are mounted in a mixture of German and American half tracks probably only captured a few days ago. The half tracks immediately use reserve move to move up my left flank onto the Ridge and debussed and attacked along the Ridge swiftly capturing the objective on the high point. It's only defenders my sniper team killed by remarkably accurate artillery fire. 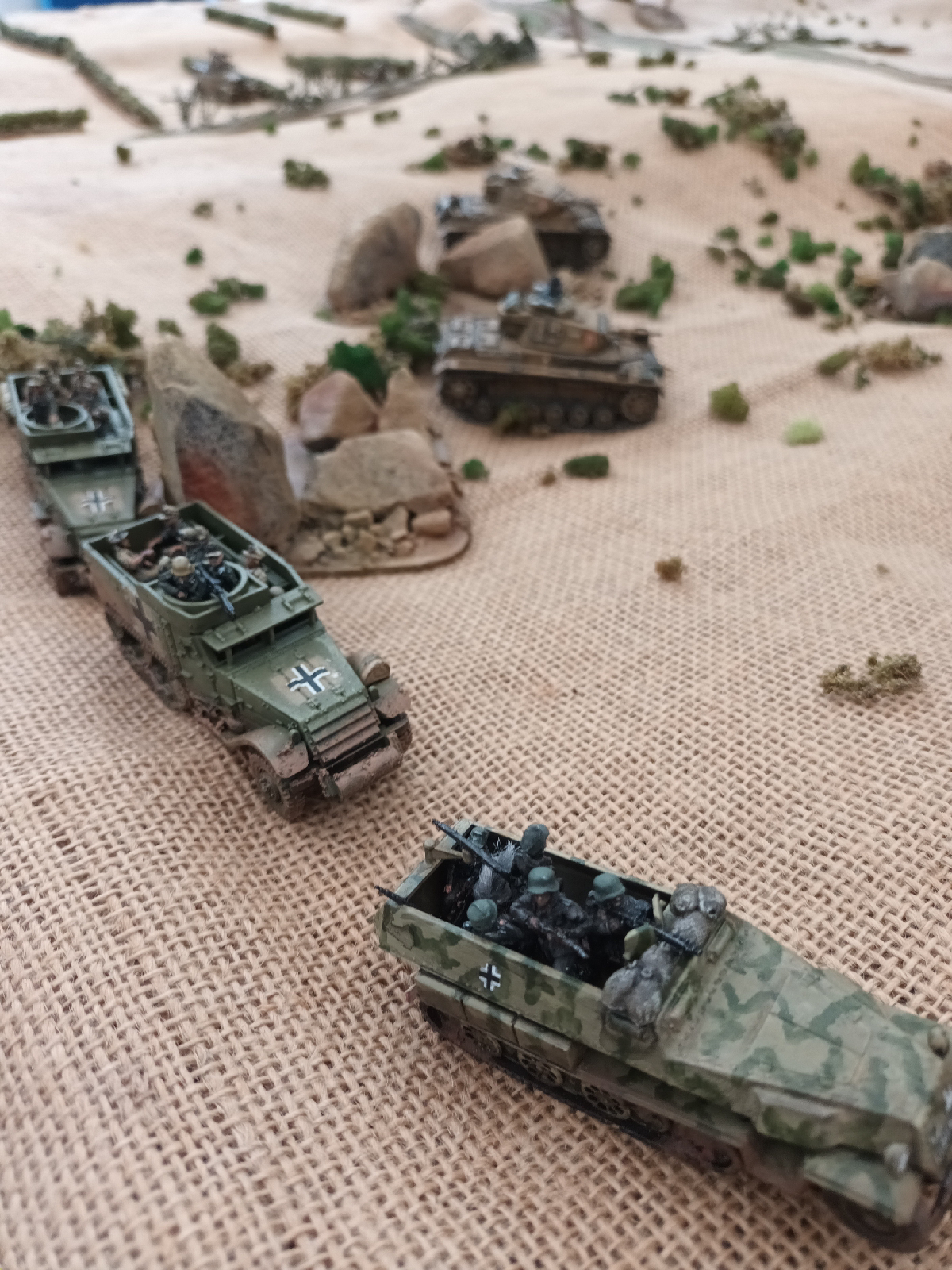 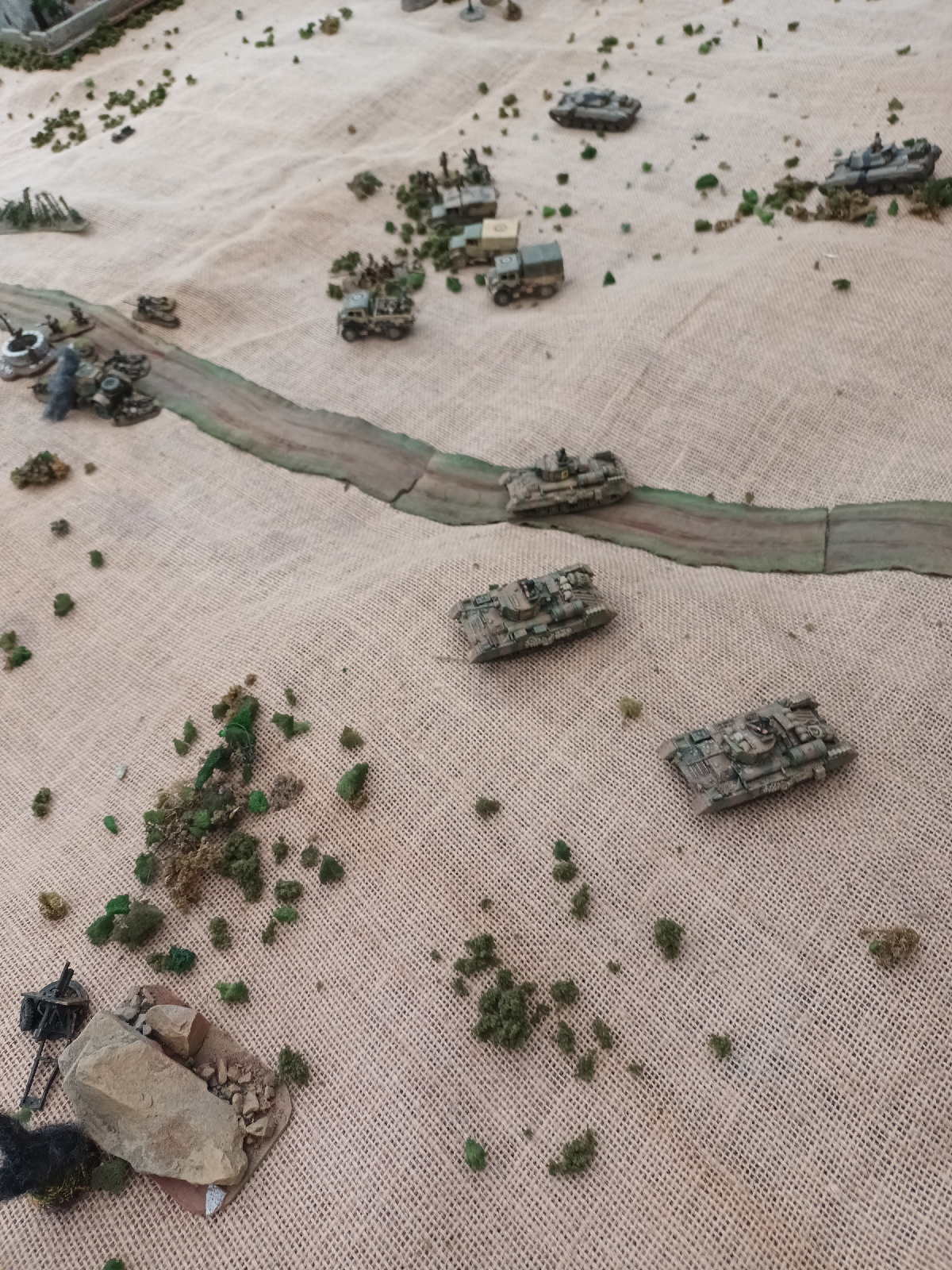 A strange situation now developed with the Valentine tanks with only a single machine gun attempted to protect the objective from the advancing Panzer Grenadiers. The German infantry made it to the rocky cover and the infantry got the better of it. They seized the objective forcing me to try and take it back but my second infantry platoon were only on foot. I'm there advance would likely to be slow it was at this point that the German artillery fire also destroyed my scout car depriving me of the only link to my off table guns! Meanwhile the Crusader II’s advanced gamely against the Panzer IV special lurking out on the plain. Hoping that by keeping moving and using the folds in the ground they could avoid being picked off by it’s much better 75mm gun. The two pounders on the Crudaders need to too be much closer. 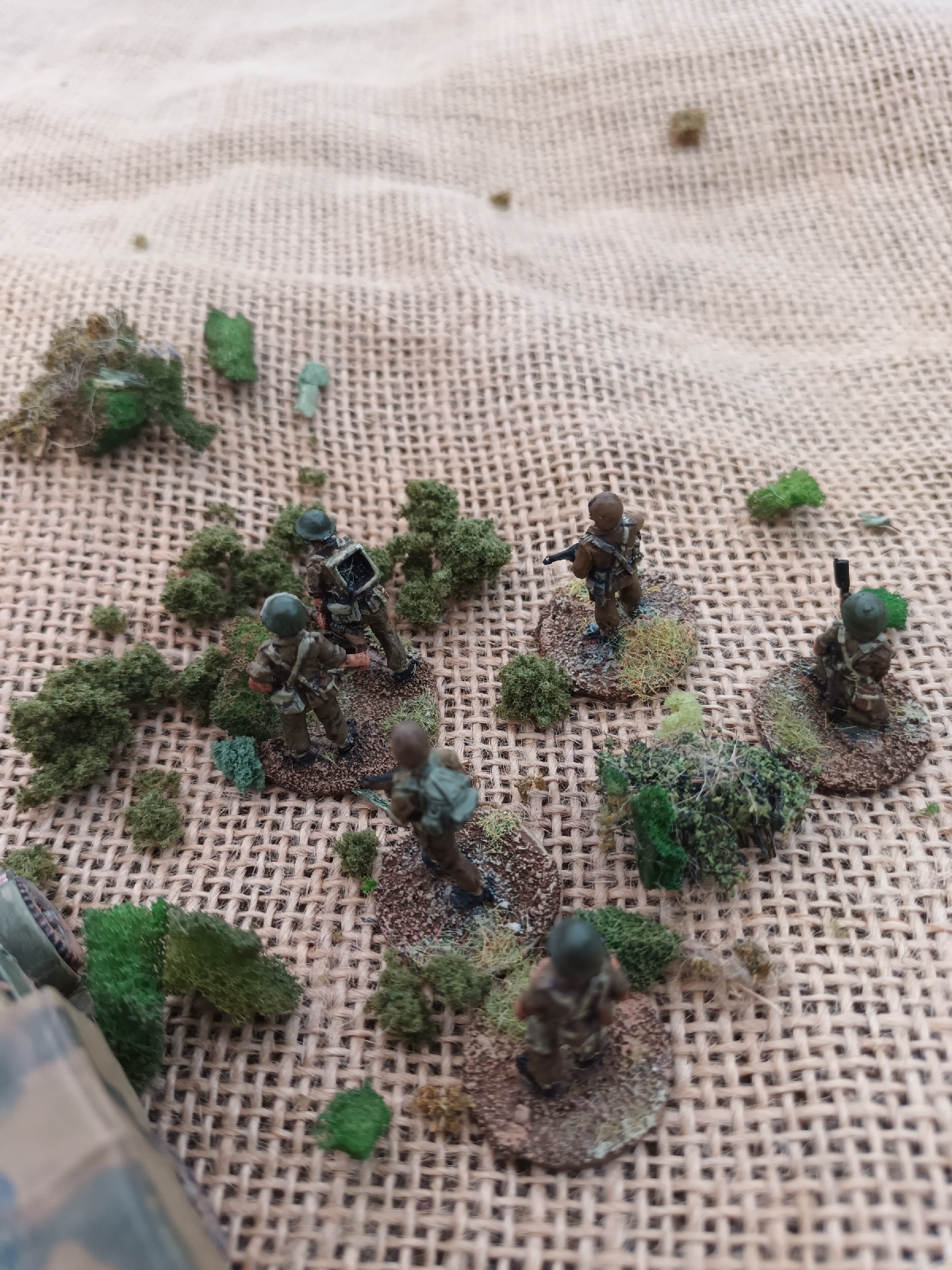 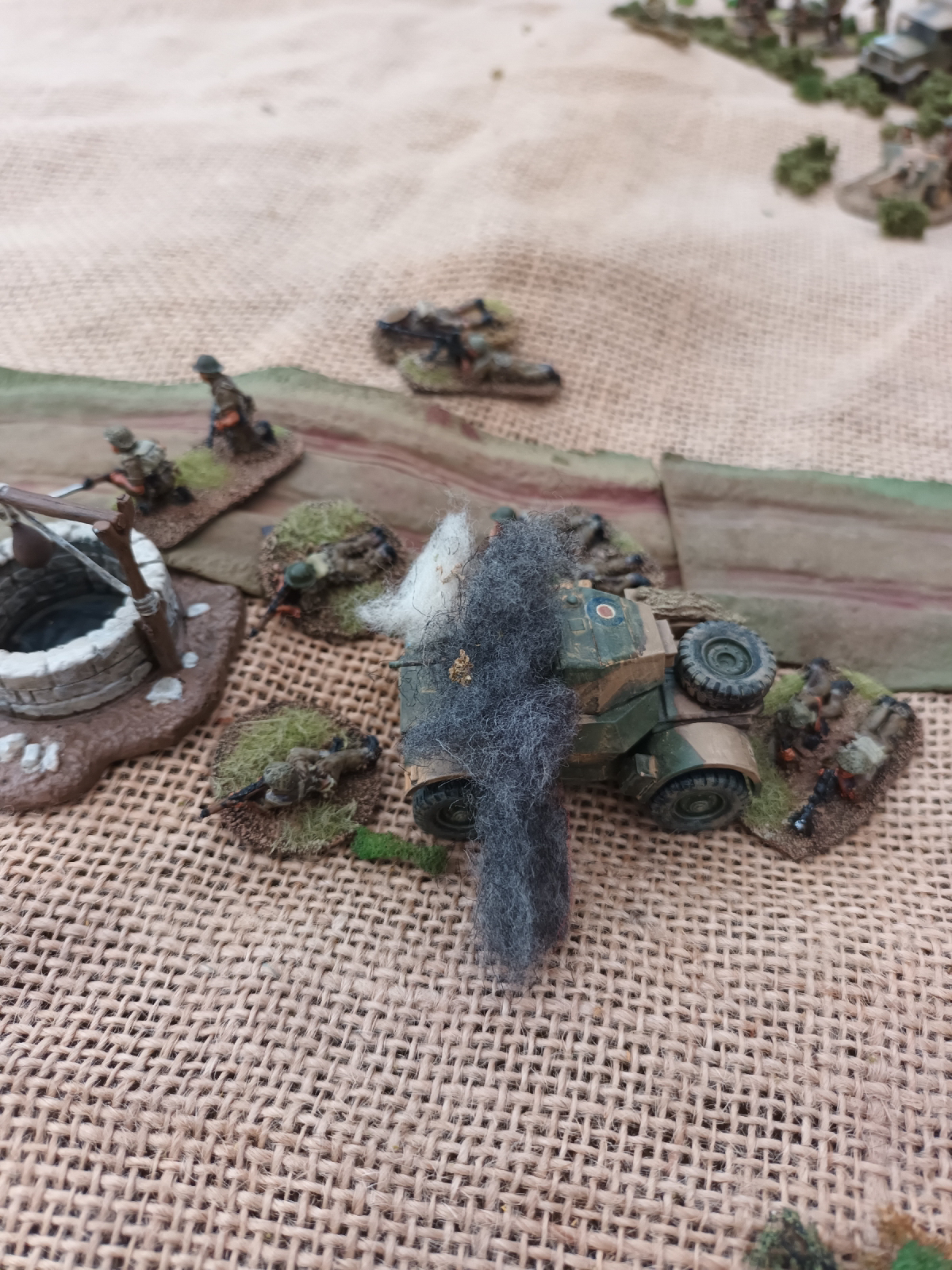 Meanwhile my infantry having formed a base of fire in the valley advanced to seize the well objective. One infantry section, using the armoured car knocked out by a mine for cover seized the objective forcing the Germans take another chit. The tanks on both sides exchanged fire but the short 50 millimetre guns of the panzer III is bounced off the heavy armour of the Valentines. But the  Valentines two pounder guns what able to penetrate the armour on the German tanks occasionally one was pinned. But  it was more success in pinning the German Panzers  from mortar fire the from the tankers. 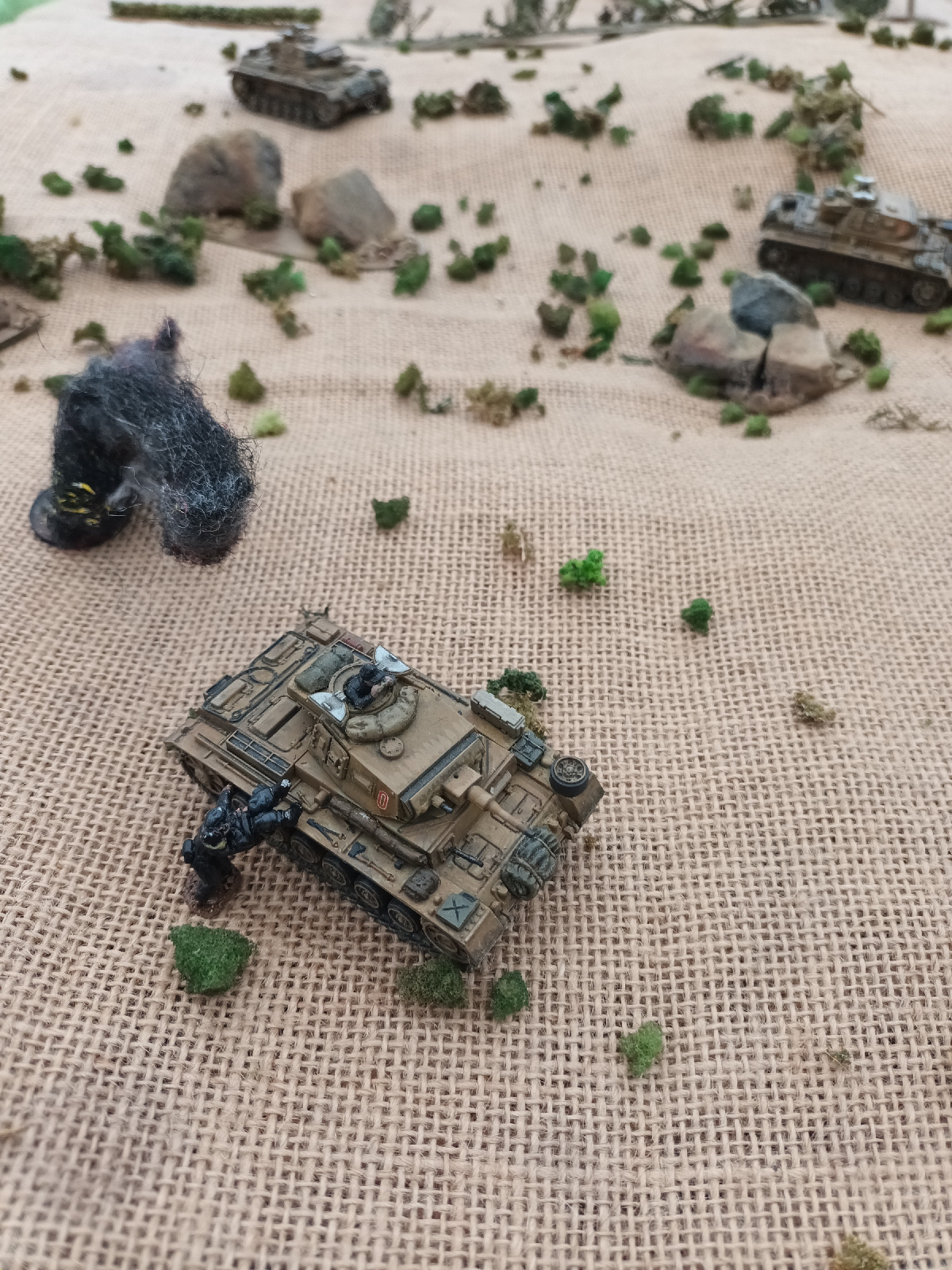 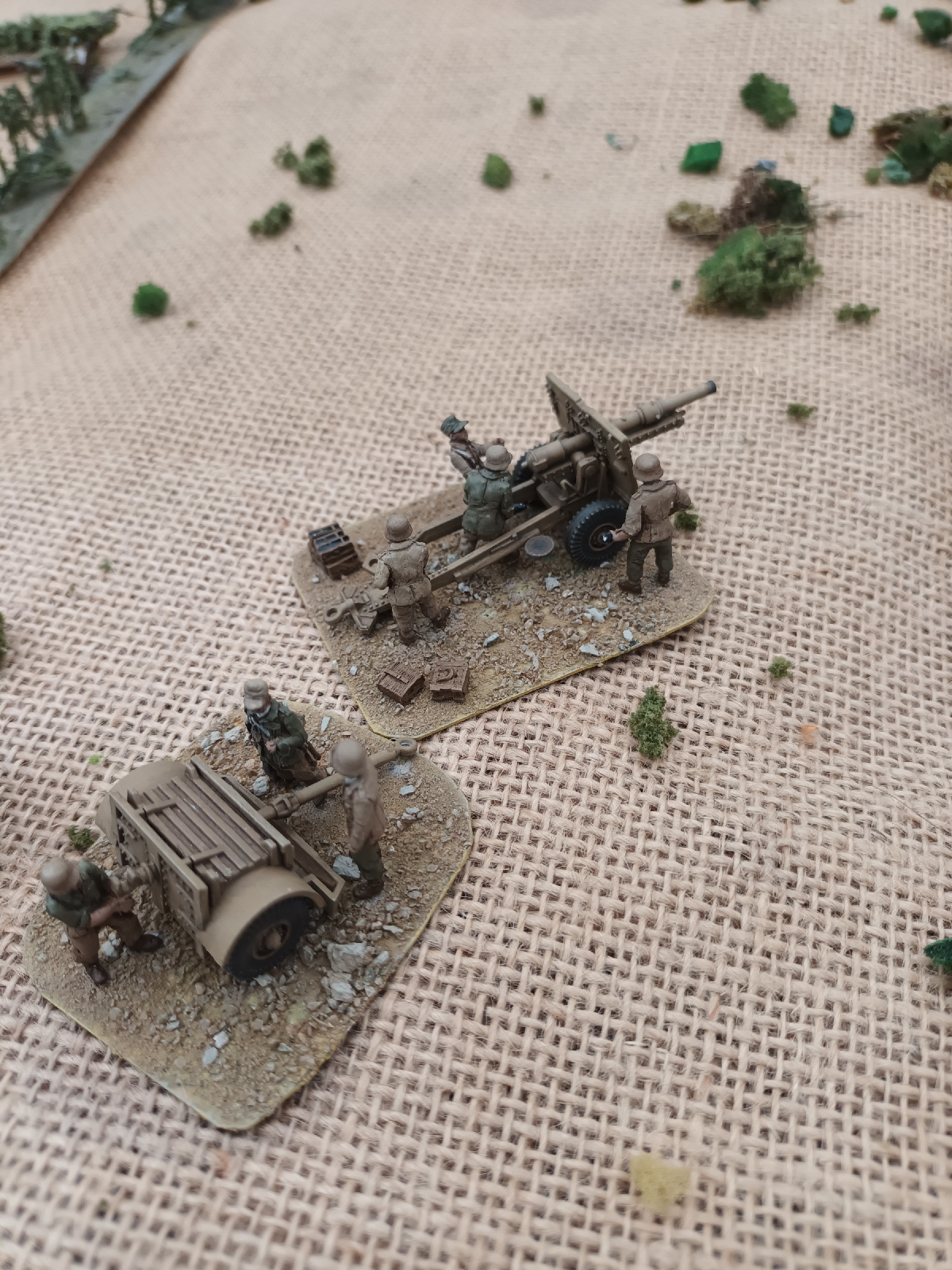 All across the field but particularly on the right the German tanks advanced bravely forward most of Valentines fired from static positions but they need to try and pin and prevent any further attack  from the infantry on the ridge. While the Panzer contrate there fire against the my tanks 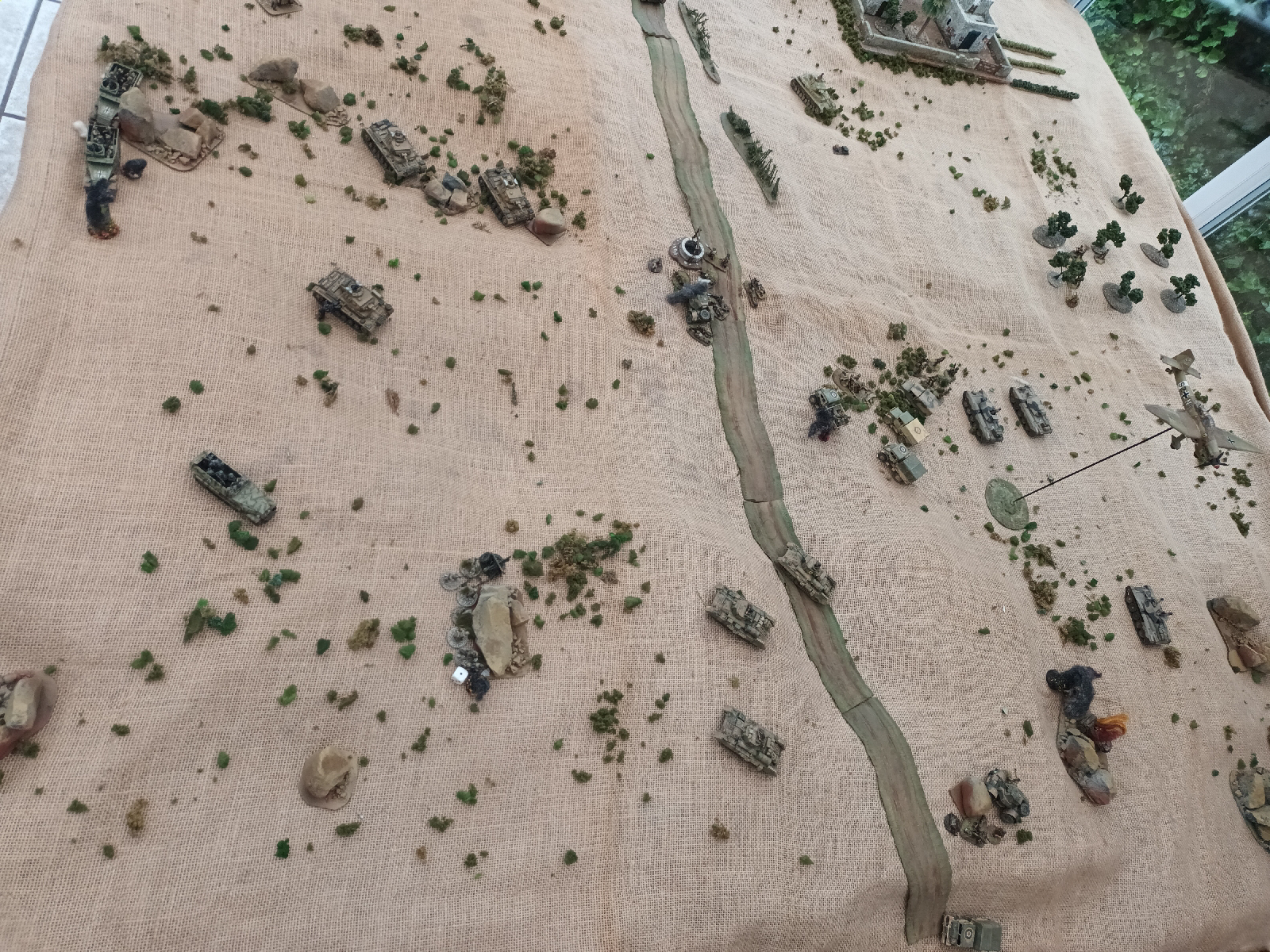 Drawing air attack chit gave me hope . I rolled and the arrival was awas a hurribomber. I had hoped I its cannons would prove useful against the panzers - after all its nickname was the flying tin opener but I hann't taken account of the terrific anti aircraft fire provided by the quad flak mounted on the back of a truck covering the panzers. Pinned and damaged after two successive attacks against the panzers. I decided to leave the hurricane circling the field  before it was shot down and cost me a chit. Having lost his duel against the German flak the RAF eventually was effectively neutered by German anti aircraft fire. 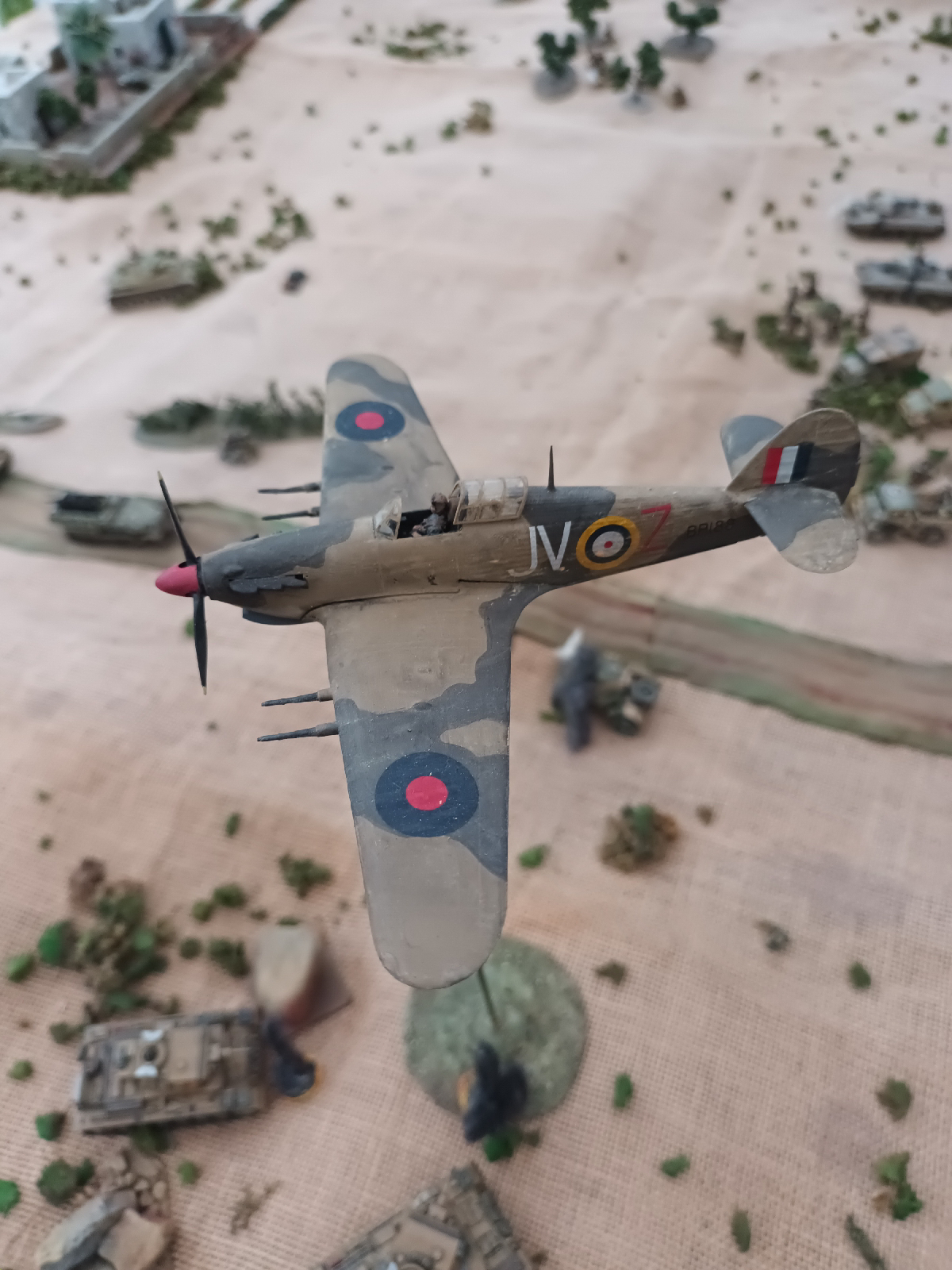 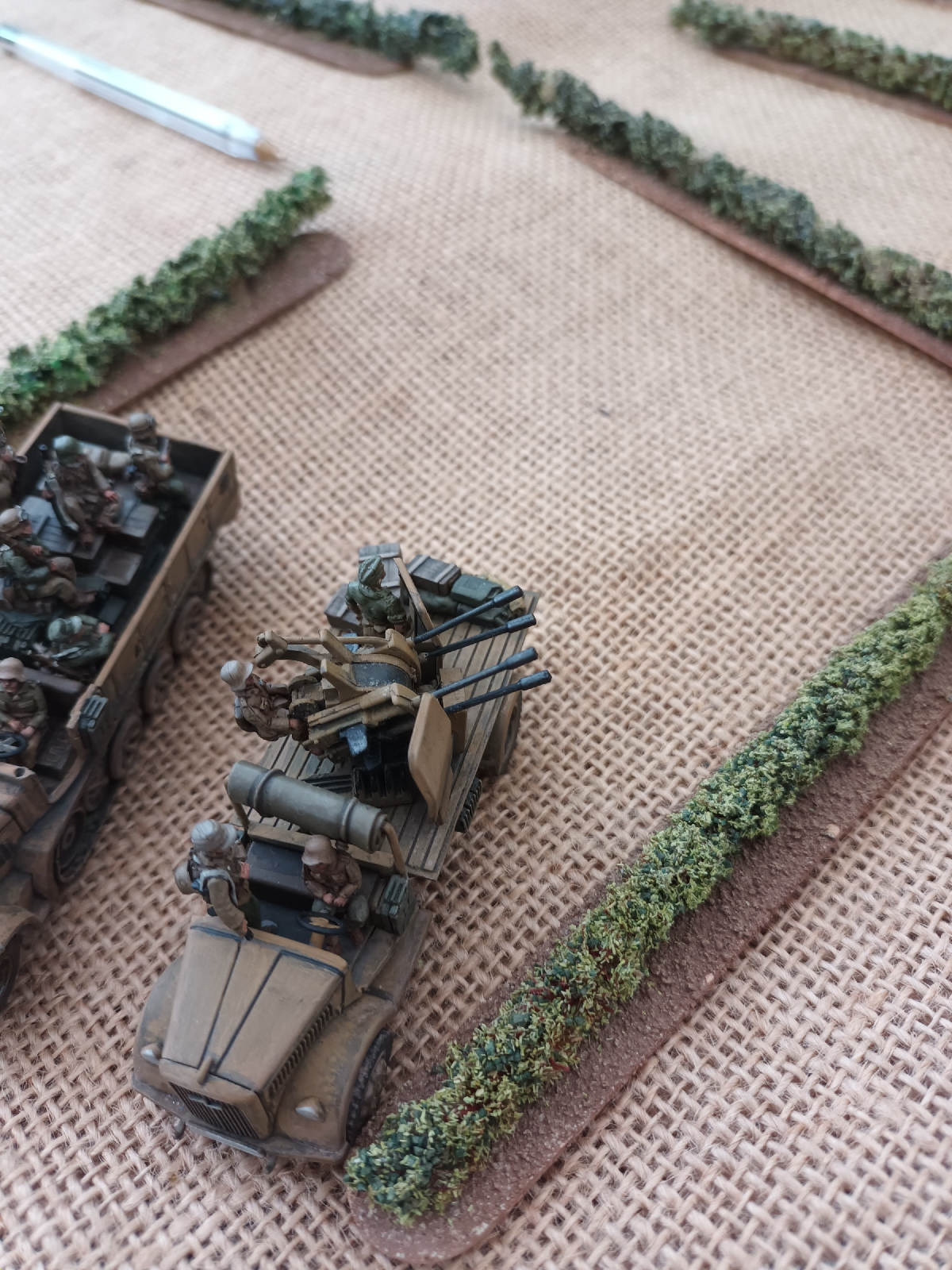 Panzers  continued their advance Panzer III covering the attack buy a half track mounted infantry at the well. My defenders , only one section,  quickly pinned and overwhelmed in a swift and violent assault as the Panzer Grenadier is made good use of their armoured half trucks speed. We were being pushed back all across the front. Eventually the Panzer IV picked off one of the Crusaders.  But Valentine's remained invulnerable to their fire. One  Valentine managed to pick off a long barrelled Panzer 3 in return as the Germans consolidated their hold on all three of the objectives. At this point they could have claimed an all objective held win but we decided to play on. 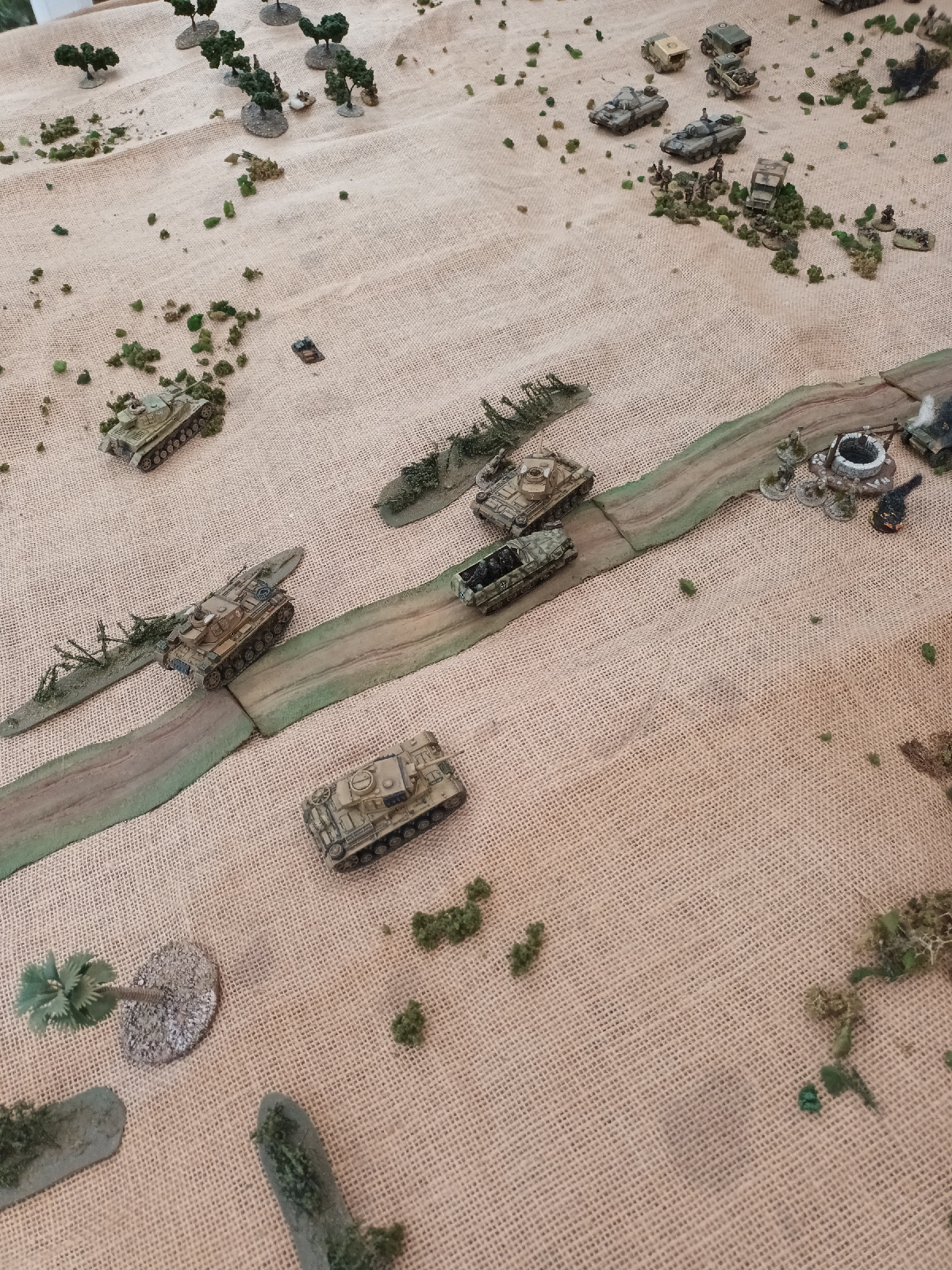 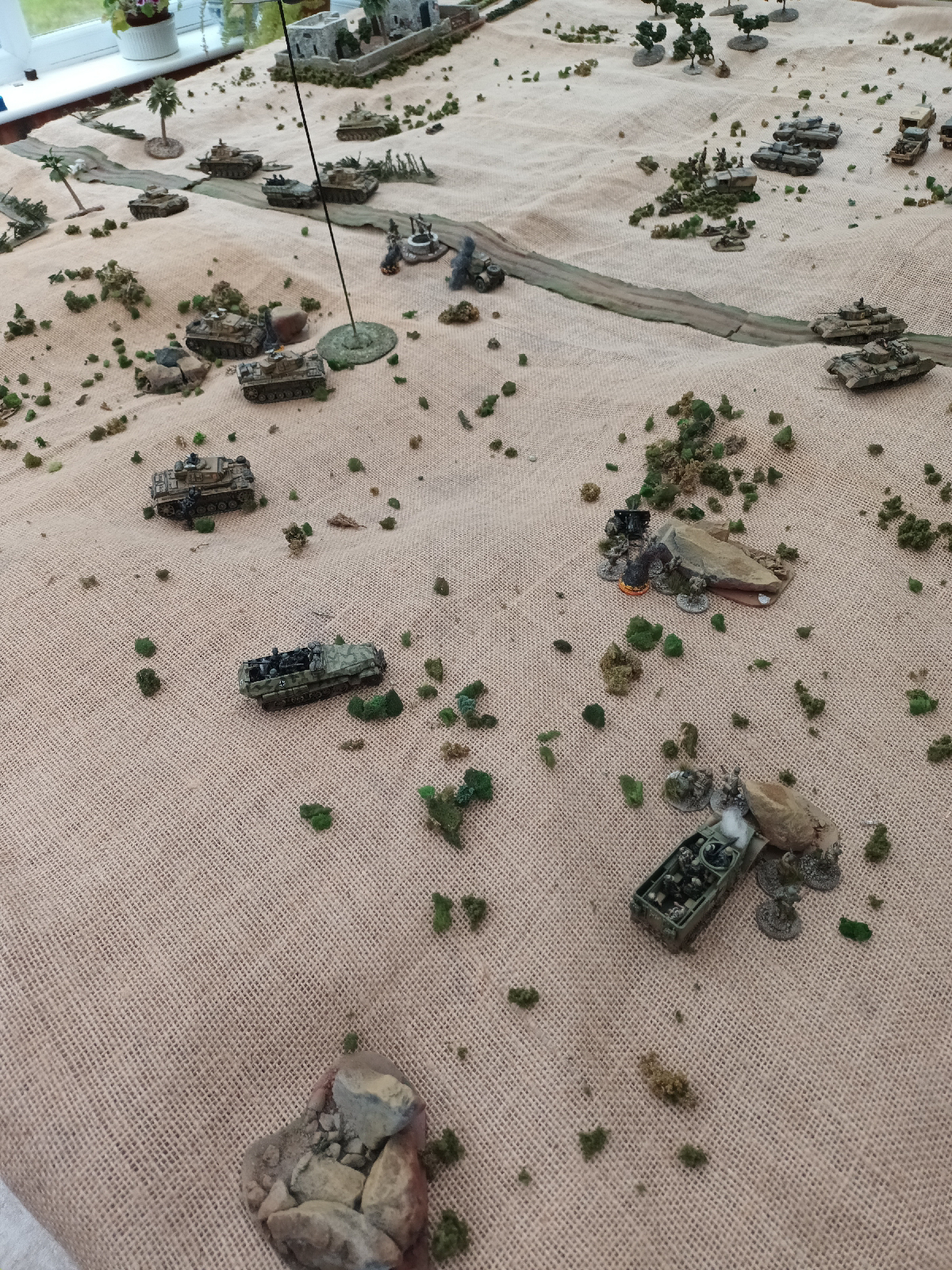 The British infantry pursued arriving on foot made heroic efforts to attack the objective on the ridge and capture it back on the German Panzer Grenadiers but with the machine gun support on ambush fire with only the Valentine machine guns as support.  There was little real support for their attack. They were unable to press home that successfully knockout the German defenders  and  recapture the objective. 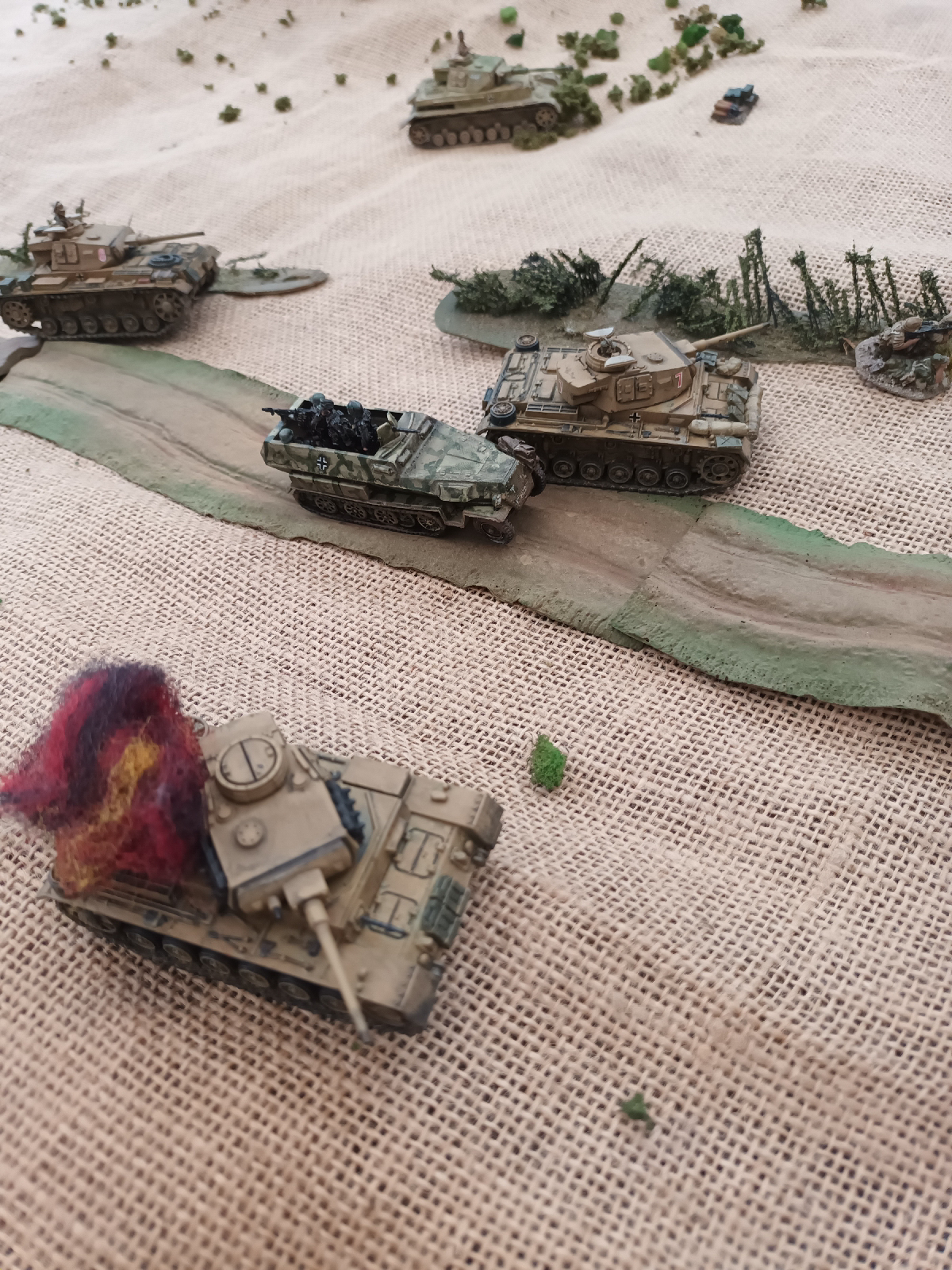 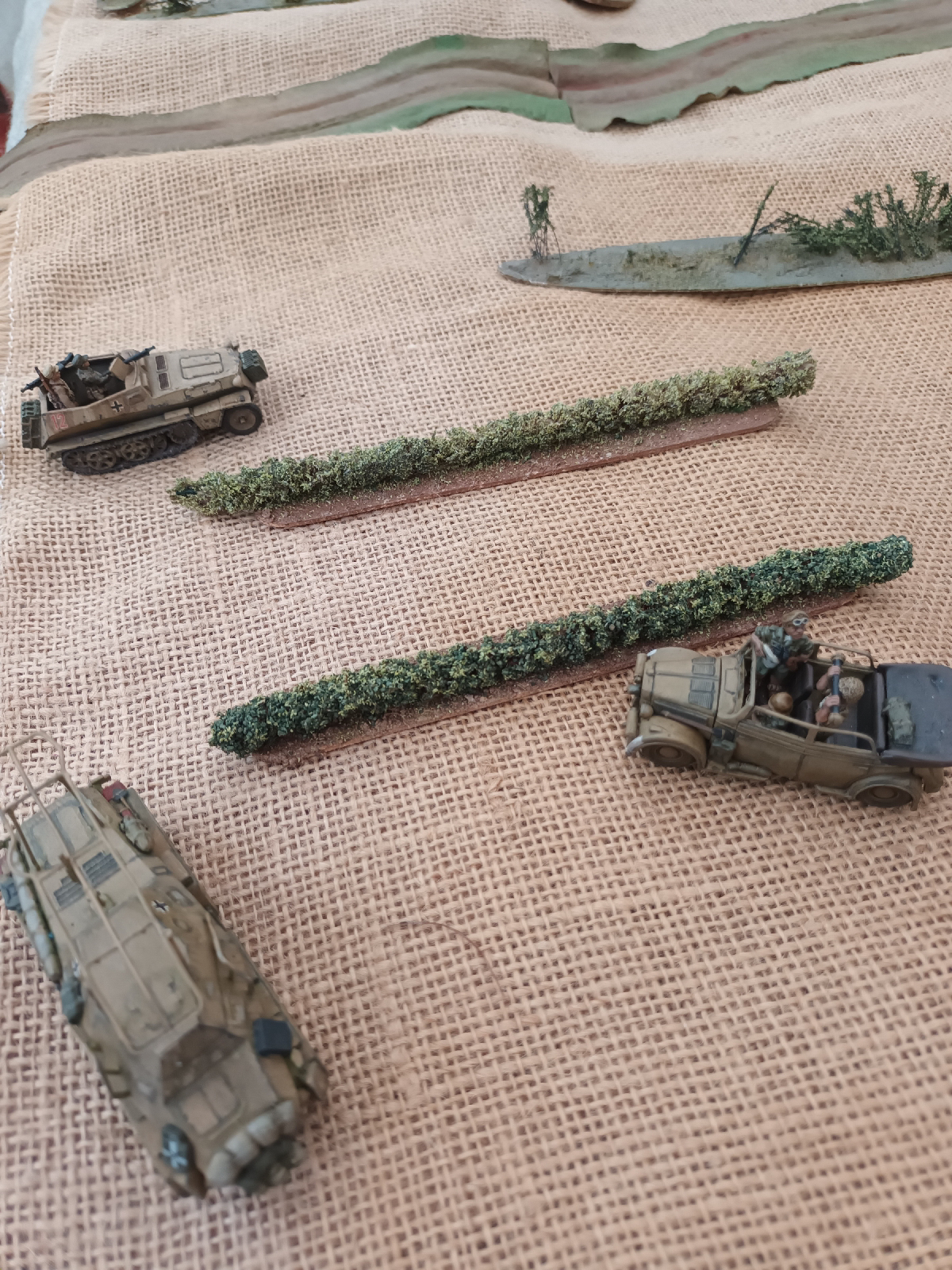 They attacked  wave after wave they were never able to recapture this objective and gradually as they were pinned and suppressed chits were taken our battle rating total got closer and closer to the total. At the end of the battle with the Panzer IIIs climbing the ridge towards the Valentines the ridiculousness have tried to knock them out with the Valentines tiny two pounder guns became clearer and clearer and as I reached the battle rating total  at the end of the game only two of the attacking panzers and one of the Crusader II’s have been destroyed 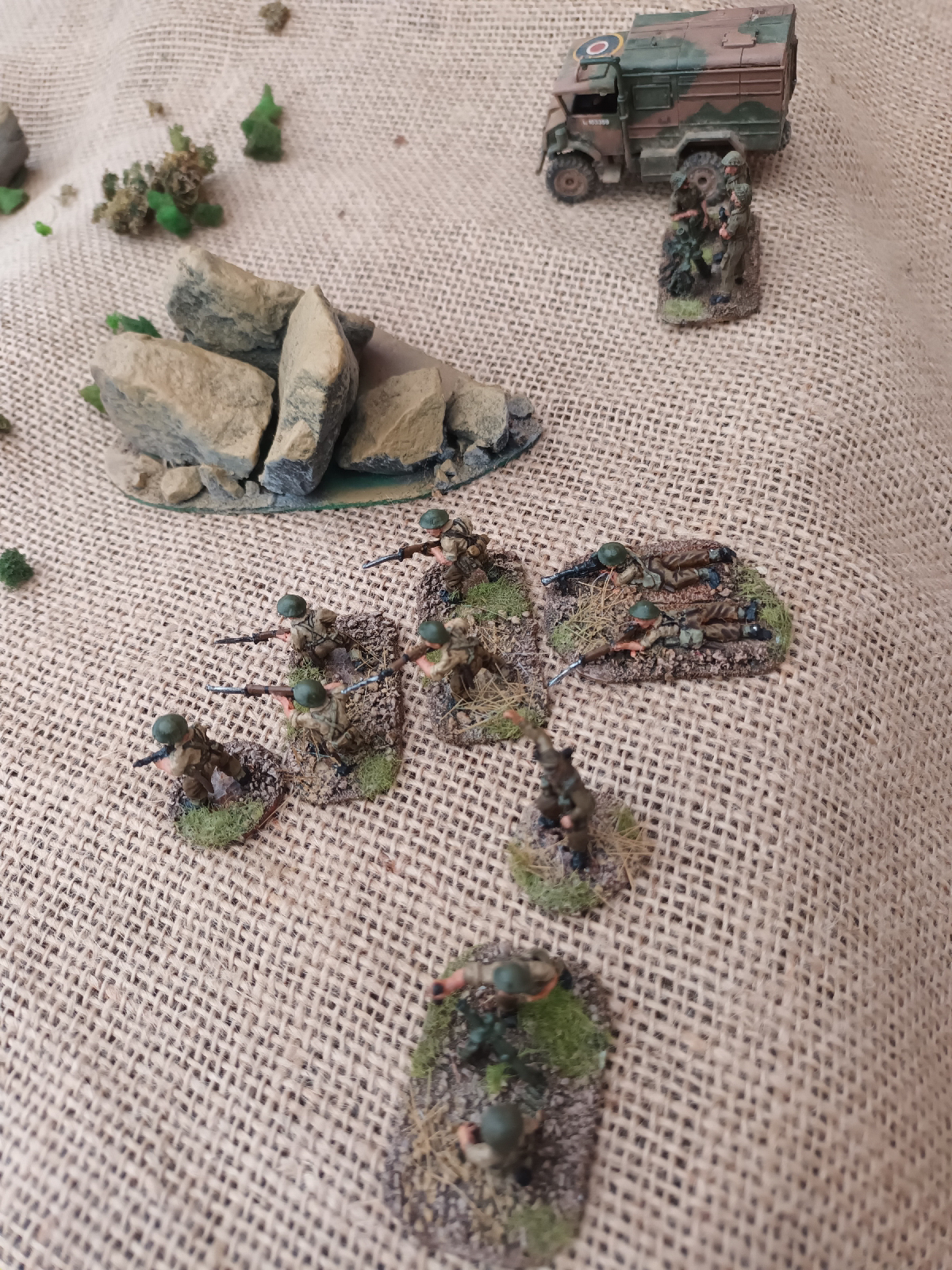 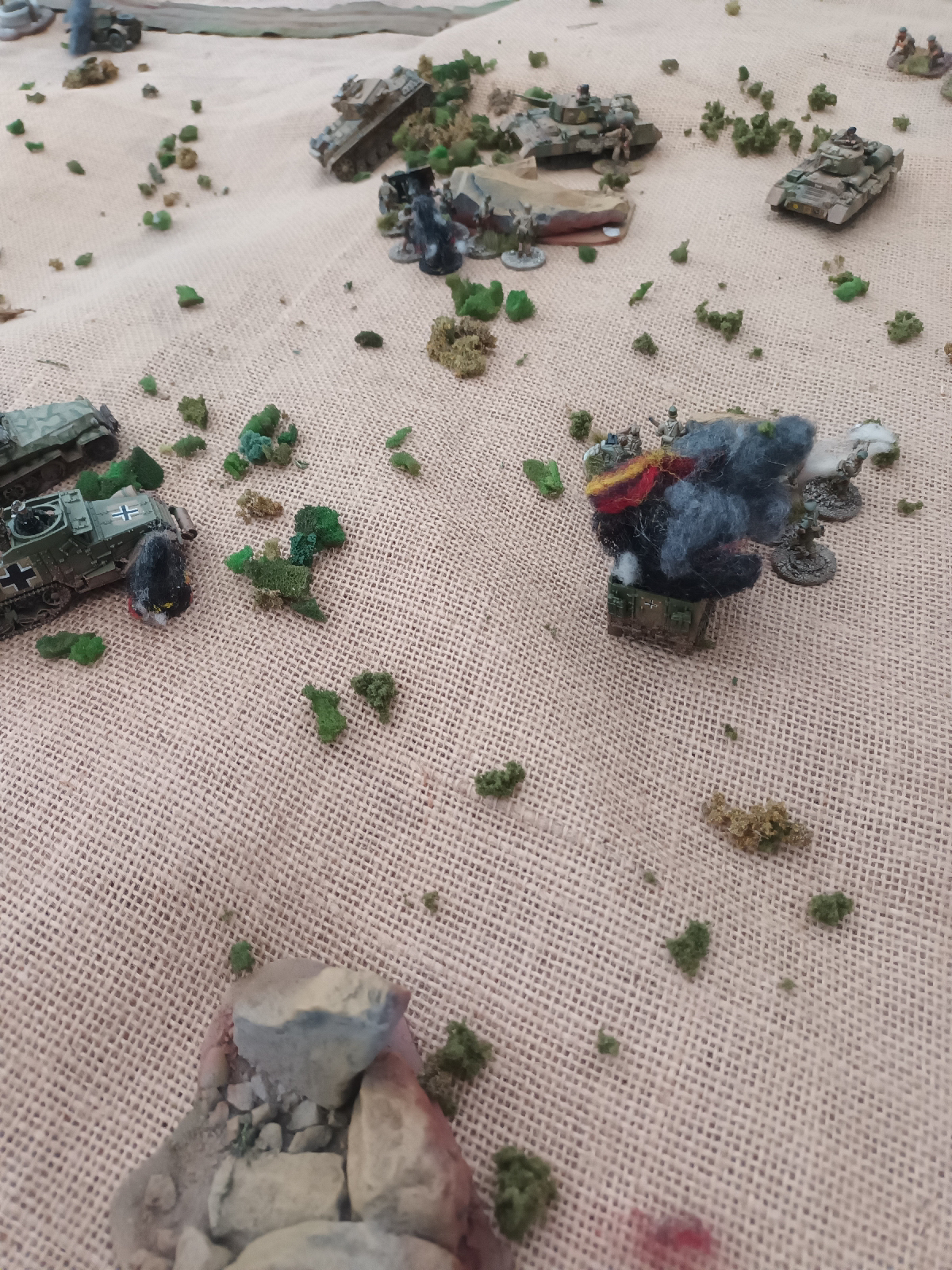 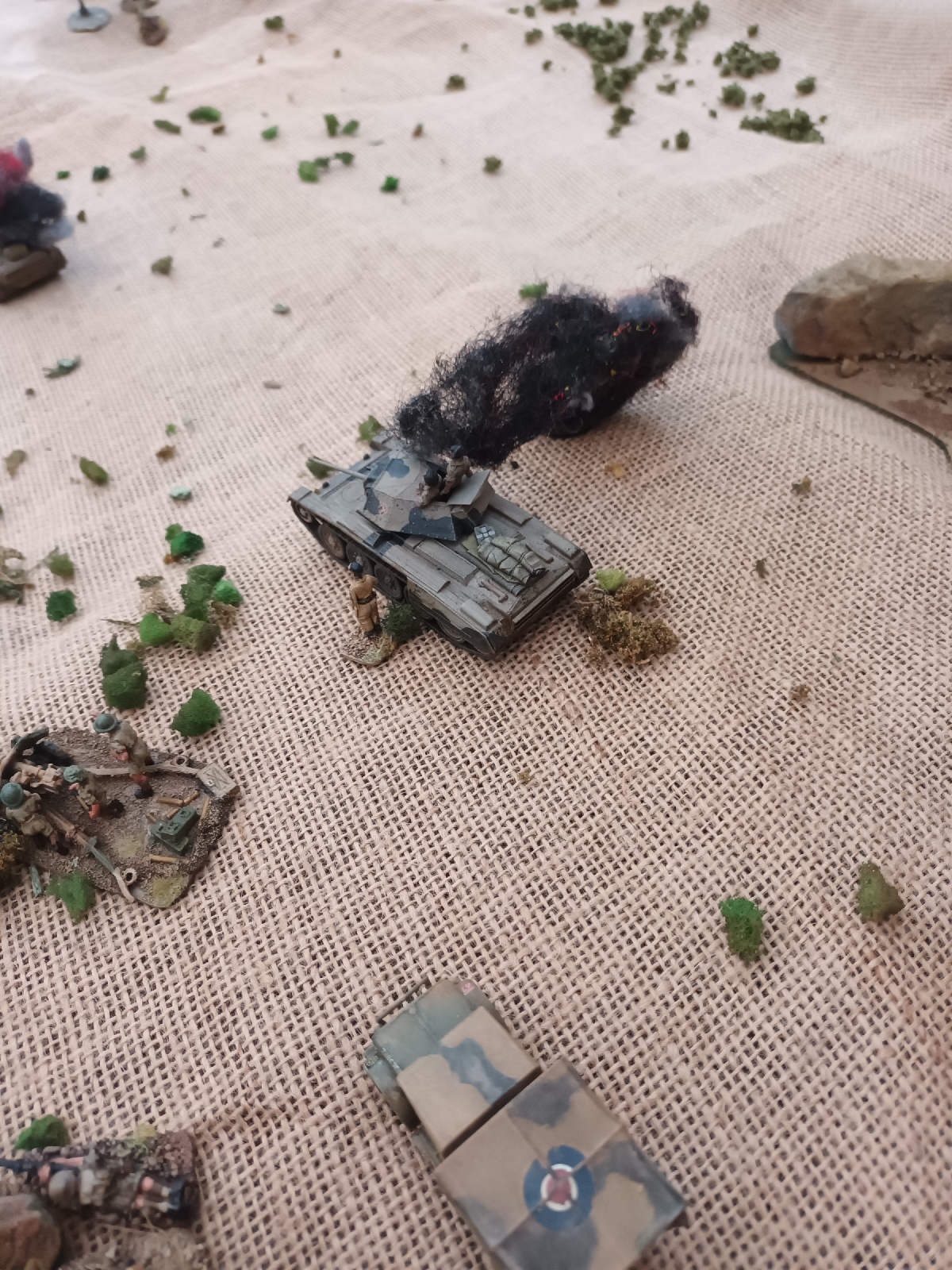 I think overall that the loss of my artillery link early are proved disastrous because it was probably the only thing that could have slowed the panzers down and the Germans own artillery knocking out my defences early on left the objectives open to being quickly seized. My opponent made excellent use of his armoured Panzer Grenadiers these are an expensive asset on the battlefield  to be worth their points they have to make an impact but they were used boldly and  very successfully overall. 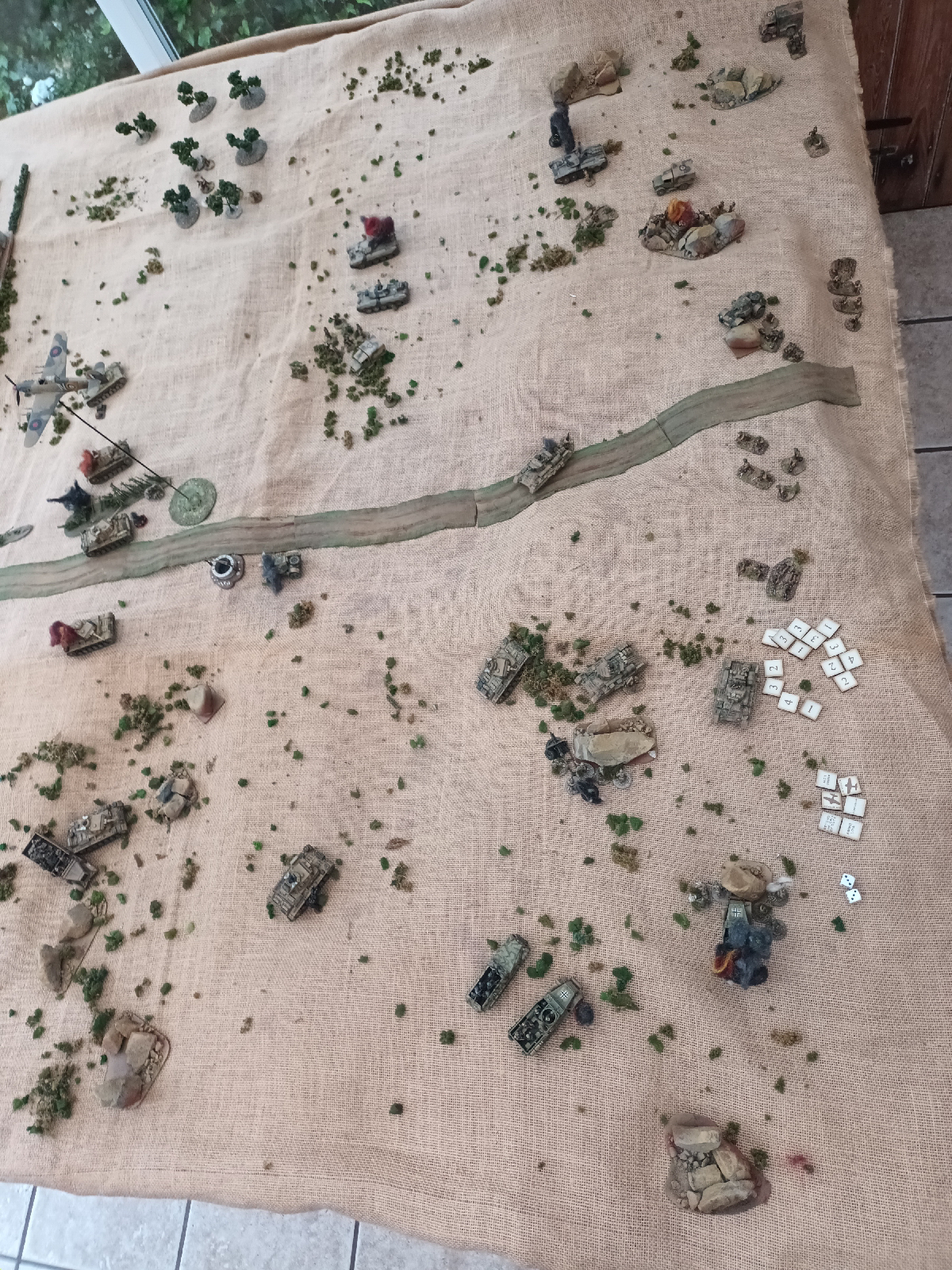 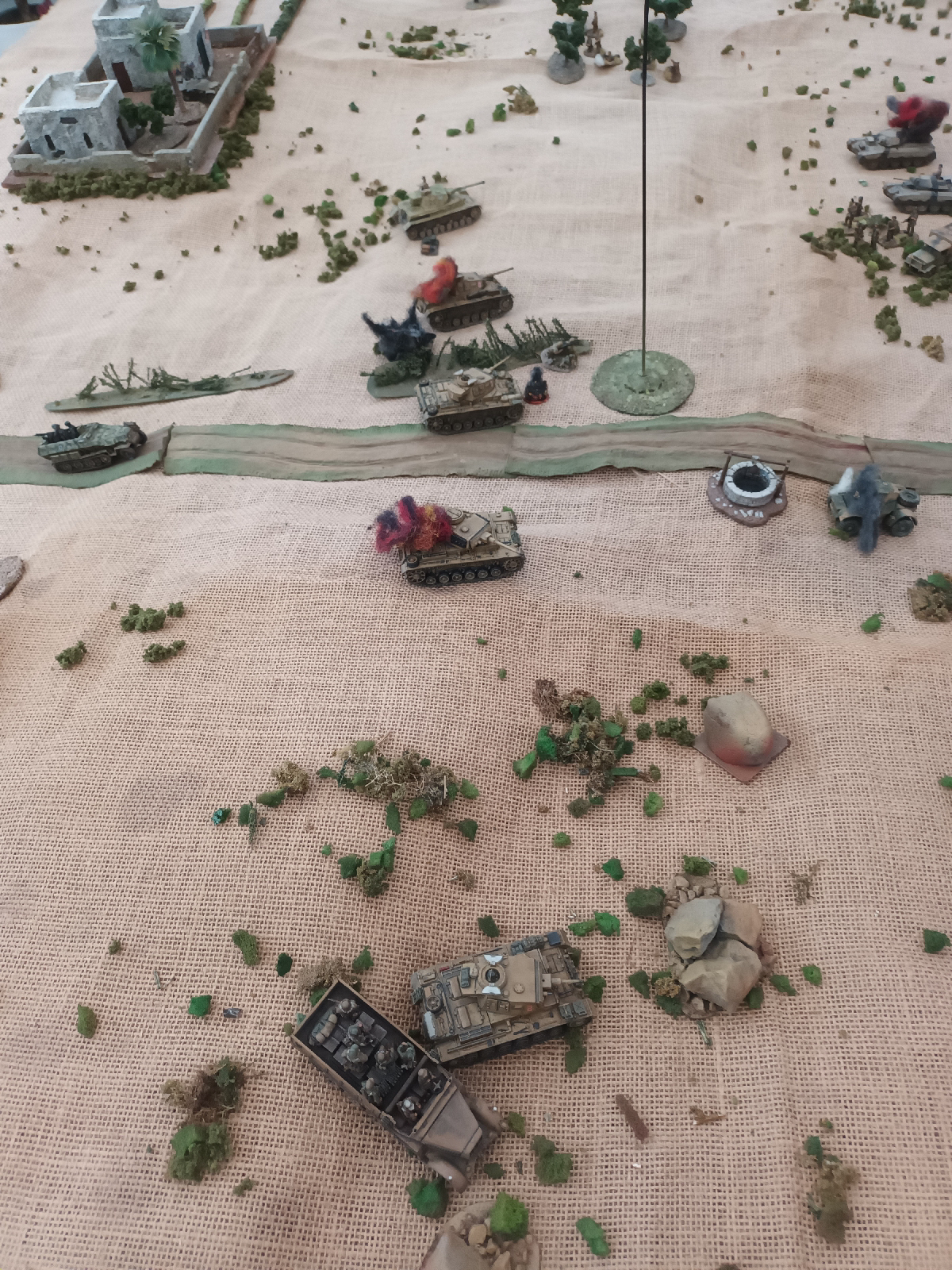 A thoroughly enjoyable game I think it was mainly kept in it by my excellent chit draws which got as you can see six special tokens overall but in the end the German player was vastly successful winning the battle comfortably. AS Gore Force withdraws intact towards Thala 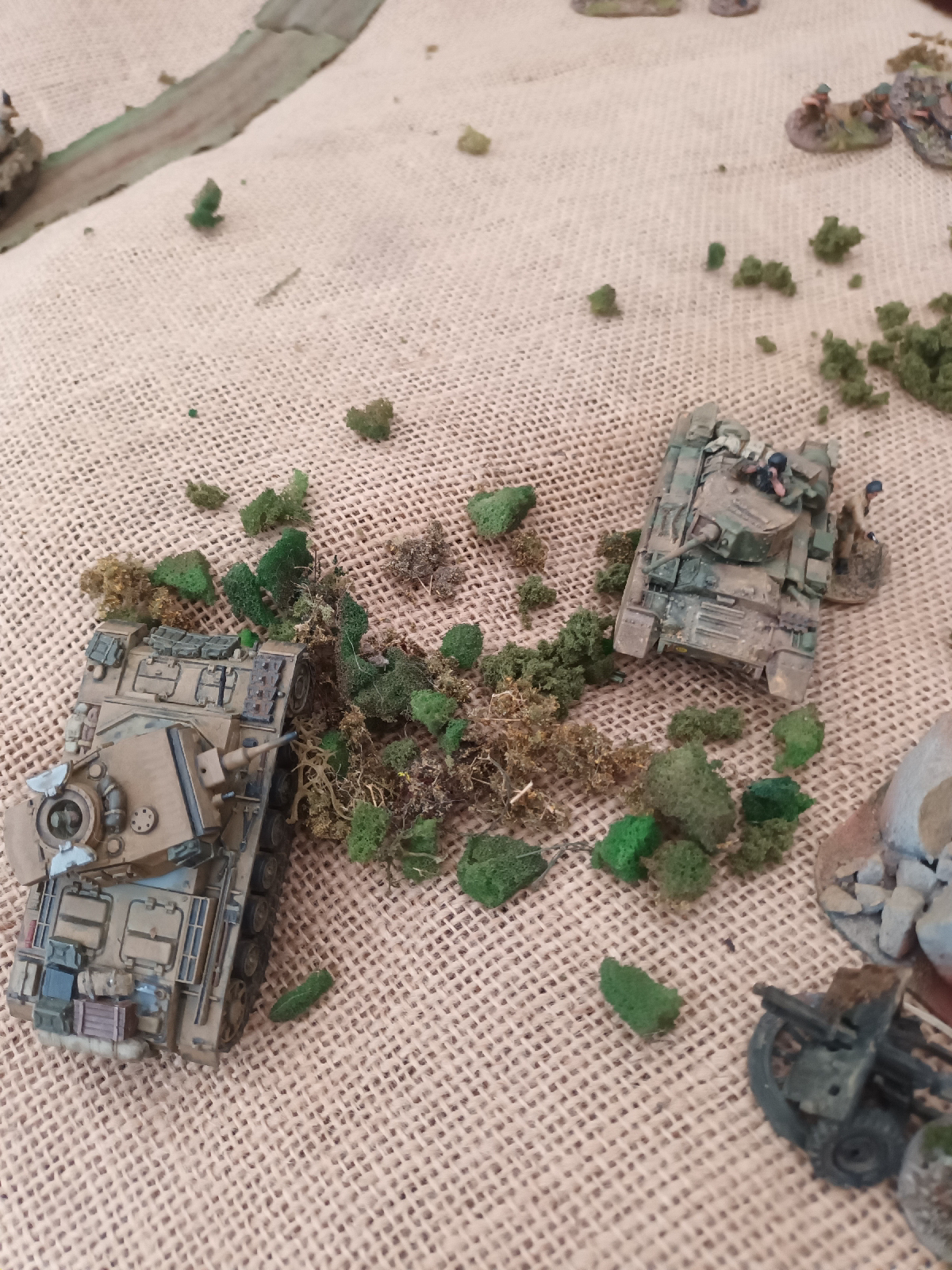 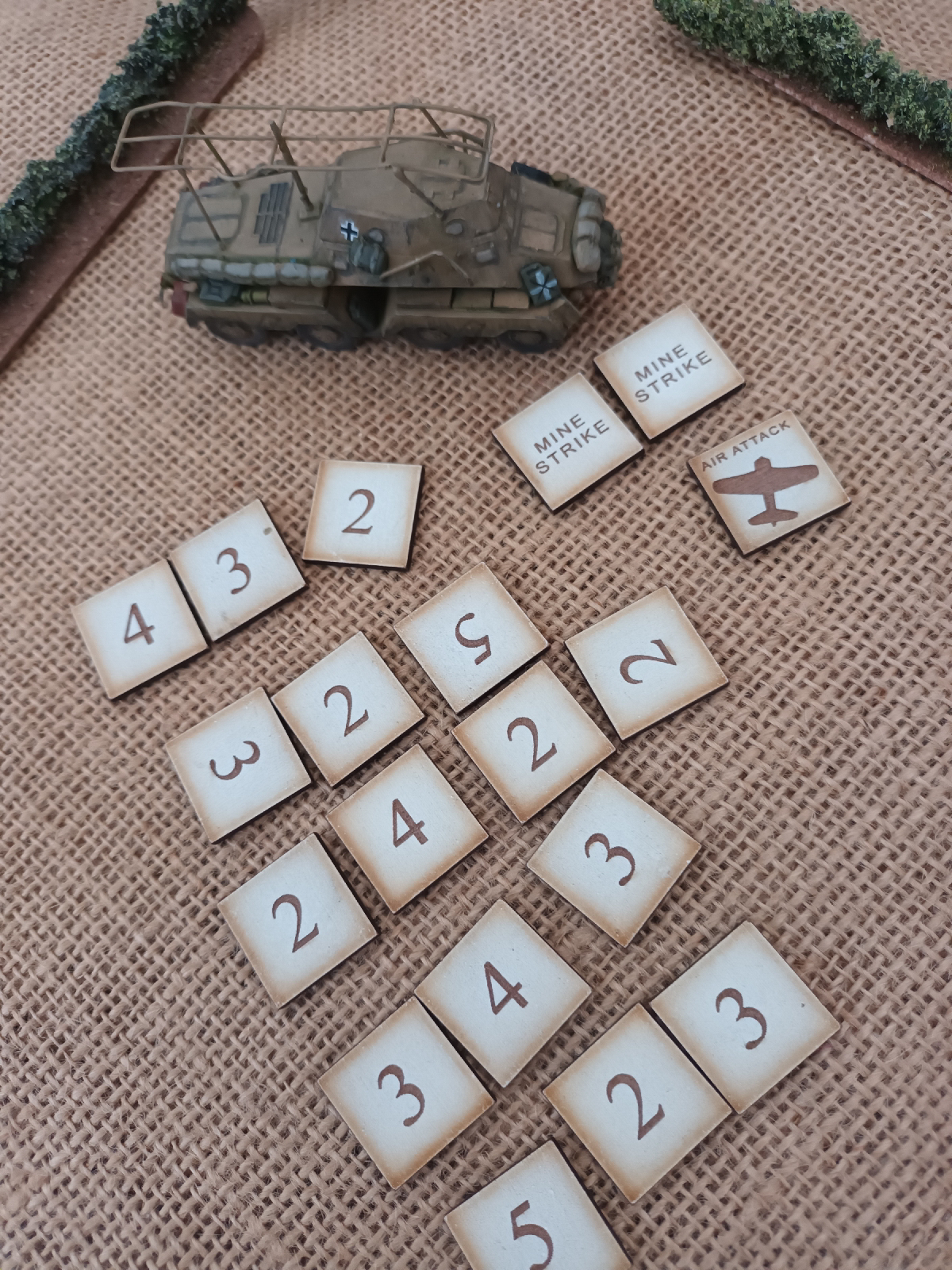 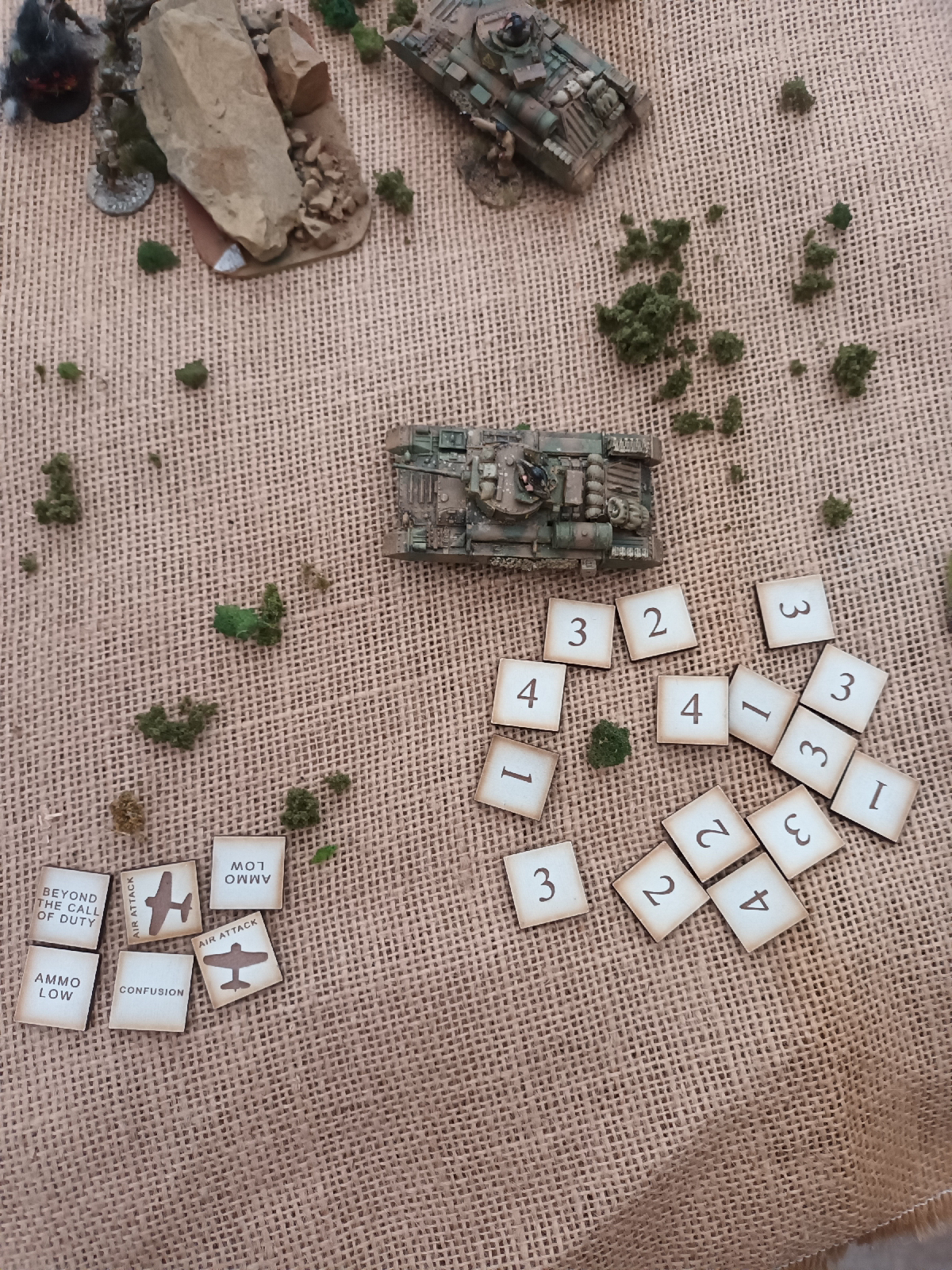